Yogurt Worth Waiting For

a Seattleite’s love of Australian-style
Greek yogurt pays off 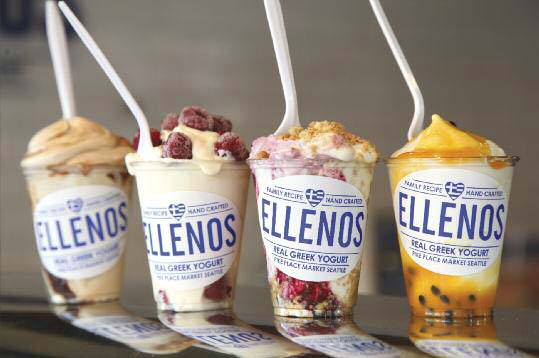 Yvonne Klein fell in love with Greek yogurt while working as a flight attendant, on layovers in Australia. The yogurt there was unlike anything she had seen before—displayed as if in an Italian gelato shop, drizzled with the gem-toned colors of seasonal fruit purees. The texture was closer to cake frosting than to that of American yogurts—sweet without being cloying, like the ripest summer fruit. Yvonne fell hard. She knew she needed to find a way to bring it back to Seattle.

It took more than a decade of effort, but Yvonne and her husband, Bob, now get to watch people at Ellenos Real Greek Yogurt, their Pike Place Market stand, fall as hard as Yvonne did for a product that Seattle Times food writer Nancy Leson described as “Greek yogurt you’ll swear came from the gods.”

The story begins with a five-year search for the perfect spot—a location that would be eyecatching. In 2007, Bob purchased a dream spot in Pike Place Market, but it came with a problem: Corner Produce was a produce stand, not a yogurt bar. That didn’t deter him, though. He gave away his marketing business, trained for two weeks with the farmer who previously owned the business, and went to “produce college,” a quick course on selling fruits and vegetables. With the location secured, it was time to bring on some important partners: the yogurt makers.

Bob first approached Con Apostolopoulos, whose yogurt business was considered the best, about coming to Seattle, but the Australian saw no reason to move halfway around the world. The Kleins waited patiently. According to Yvonne, other yogurt makers in Australia were “second class” compared to the Apostolopoulos family.

It was four years before Con finally emailed that he was ready to make the move. His kids were grown—his son Alex, a lawyer, was willing to come with him to help run the new family business. Suddenly the Kleins’ proposal made a lot more sense.

Alex grew up around yogurt making and didn’t mind giving up his law career to move with his father. “I always felt more comfortable in the family business,” he says, though he admits his first few winter farmers’-market experiences in Seattle were far from comfortable. “I didn’t own any jackets,” he laughs.

The secret to the yogurt, says Alex, is that it takes a long time—four to five days—while nearly everyone else does it in 24 hours. It’s the same patience, along with a commitment to producing only the absolute best product, that paid off for the Kleins in 2013, when Ellenos served its first scoop in Bob Klein’s Corner Produce at Pike Place Market.

But after less than three weeks—with nearly 8,000 customers already introduced to the yogurt—the Market’s Preservation and Development Authority (PDA) shut down the shop. There are a litany of requirements and limitations that apply to opening a business in the historic market. What Ellenos did—co-opting a piece of Corner Produce and converting it to a yogurt bar—didn’t adhere to them.

Alex’s law experience came in handy, as he negotiated with the Pike Place Historic Commission, proving that no produce was displaced, agreeing to make the yogurt façade smaller, planning line control, and assuaging the worries of other vendors about keeping the market true to its local, farm roots.

Looking back, he thinks the shutdown probably fell under the umbrella of “all publicity is good publicity.”

Within weeks, the market location reopened, and word of the incredible yogurt spread— first through the Pike Place Market’s extension markets, including one in South Lake Union, where Amazon employees got their first taste. Like Yvonne, they were unable to bear going without. When that market closed for the season, the employees convinced their food service provider to carry it on campus. Bon Appétit Management Company then brought it into its other local locations: Starbucks headquarters, the Bill & Melinda Gates Foundation, Virginia Mason, and others. It was the beginning of expansion for Ellenos.

Uwajimaya was the first grocery store to sell Ellenos yogurt. “It was just our farmers’ market set-up, next to the seafood department,” Alex says, laughing at their scrappy roots inside the store. That was in late 2013. Ellenos now has yogurt bars installed in two Uwajimaya locations, and other grocery stores are clamoring to add them, while their pre-packed yogurt containers are available at various grocery stores and cafes through Seattle.

With all its success, Ellenos quickly outgrew the local dairy it started with and now sources from Edaleen Dairy, in Lynden, Washington. “We need the milk to be as fresh as possible,” explains Alex, “straight from the cow.” Most of the milk they looked at was homogenized, separated, or otherwise standardized

“When there are so few ingredients,” Alex says, “it’s so important that they’re really good.” They ran into similar quality problems when trying to source fruit purees for their toppings. Ellenos now makes everything in-house, finding that to be the only way to avoid paragraph-long ingredient lists. Their top seller, the marionberry, uses fruit grown in Woodland, Washington, made into puree in Ellenos’s Georgetown factory.

To make the yogurt, milk goes straight from the truck into the kettle, where it’s cooked. After cooling, the culture—which the Apostolopoulos family brought with them from Australia (“an heirloom culture,” jokes Con, saying it has been in the family for years)—is added to the milk. The batch is then strained and becomes the natural, unsweetened “base” variety. To make the rest of the flavors, Ellenos mixes in local Puyallup honey and cane sugar. Although he couldn’t put a finger on why, Alex says he likes the yogurt made here in Seattle better than the family product in Australia.

Whereas the first challenge that Alex faced when selling the yogurt was getting people to understand how great the product is and how different it is from what else is on the market, the yogurt has earned its reputation and now sells itself.

This has Con, Alex, Yvonne, and Bob thinking big. Alex envisions yogurt bars installed in grocery stores in every state—like florists and sushi bars are. In the meantime, the biggest issue is filling demand. “It’s still handmade,” Con says of the growing pains in production. He adds that, as they expand, they want to be careful not to lose the family-run ethos: “We need to figure out how to keep it feeling small.”

Naomi Tomky is the unrelentingly enthusiastic eater, photographer, and writer behind thegastrognome.com. Since 2006, she’s brought her sometimes over-eager mouth to tables around the world in search of new things to shove in it. Her writing can be found on Seattle Refined, Serious Eats, and Lucky Peach.