The Queen of Condiments 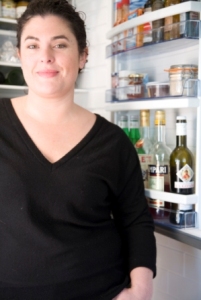 THE QUEEN OF CONDIMENTS
by Bethany Jean Clement
photos by Lara Ferroni
In which Edible Seattle visits the home of a prominent Pacific Northwest chef and reports on the contents of their refrigerator(s), snacks served, tricks performed by pets and other miscellany.

The Subject: Renee Erickson, the calm, lovely and very slightly foul-mouthed chef/owner of Seattle’s beloved Boat Street Cafe. On a Friday morning, Erickson is found watching black-and-white-era Julia Child in her Phinney Ridge bungalow. She got the DVD as a gift, she says. Her home is unmistakably reminiscent of Boat Street: rustic, charming, nearly overwhelmingly pleasant. A big blackboard on the dining-room wall has an old wine list from the restaurant with a drawing of two happy dogs chalked on it; white flowers bloom here and there; seashells are filled with picturesque stones; an antique whisk hangs above the sink.

(The chalk artist and whisk-provider is Curtis Steiner, Erickson says: “Pretty much all the old, ancient things I own are gifts from Curtis, my friend who’s a collector-slash-artist. He owns a store in Ballard called Souvenir. You should go to the store, it’s really cool—it’s on Ballard Avenue, right next to Madame K’s. All the lanterns in the restaurant are his, and he did the chalk drawings…. I’m the luckiest person.”) Sunlight streams in obediently through windows. Her white Lab, Jeffry, wears a frayed red ribbon around his neck that he refuses to remove, though it’s been there for more than a week. It all borders on too good to be true, but Erickson is genuine, funny and anti-precious: “No shit,” she says occasionally.

Snacks Served: Ethereally light currant-and-orange-zest scones, freshly baked and filling the house with a fantastic smell, of course; blood orange and grapefruit slices, bleeding pretty juice onto a white plate; French press coffee. At the marble-topped table wedged into the breakfast nook, a lap-sitting grey cat may very gently bite the visitor’s wrist as a reminder to continue petting.

She professes love for an all-natural bitter marmalade from Tunisia, made from the wild orange trees of the Cap Bon peninsula by Les Moulins Mahjoub (“They also have great olives”).

Erickson says she loves food gifts: “They’re much better than shit you have to throw out.” About a jar of lemon curd: “My friend brought it over and made weird little lemon tarts on Thursday.”

The dairy department is uncharacteristically scant. “I usually have a big thing of half-and-half and a big thing of cream,” she says, but today there’s “just the butter from the restaurant”—Cremerie Classique, a taste-test-winning, relatively bargain-priced European-style butter made by a small dairy in Clackamas, Oregon—Straus Family Creamery organic yogurt, and a few stubs in her cheese box. (Cheese boxes are recommended by French people for Americans who refuse to eat all their cheese in a timely, i.e., immediate, manner. Erickson’s is plastic with a loose-fitting top.)

Among assorted fruit/veg: half a pineapple, “two not-very-cute carrots for stock, two oranges and a gnarly-looking lime that’s still probably OK.” The expiration date on the free-range eggs: today. The peanut butter’s organic; the bread for toast is Oroweat.

An abundance of cider vinegar is explained thusly: “My mother reads the Internet, so one little health thing and it shows up in my fridge. Drinking cider vinegar is supposedly good for you.”

What Erickson prefers: Campari, “my favorite.” Also in beverages, “a dessert wine that someone gave me that I’ll probably never drink”; juice for her niece; a wine from the Jura region of France, famous for le vin jaune, yellow wine that’s allowed to oxidize (“This one’s not, which is why I bought it; it’s fresher-tasting”).

Most Embarrassing Thing in Fridge #1: two cans of Diet Pepsi. Erickson blames her parents. She does not drink diet pop (though a digression reveals she is not immune to the appeal of Nacho Cheese Doritos—”I actually love those,” she admits).

In the freezer: vodka, tortillas, more butter, bananas (for her mother, who deplores waste, to make into banana bread), homemade stock, tartlet shells from the lemon tarts and a giant block of short ribs from the restaurant (“I’m supposed to braise them next week”).

The Fridge (#2): late-model residential Magic Chef, white. Located in the basement (where the visitor is instructed to ignore various piles of laundry), “the pork-and-beer fridge” is home to four curing pig legs, suspended by twine in the main compartment. “They’ll be prosciutto or something like that,” Erickson says. She carefully points out that these hams are for her personal use (the health department would frown on it otherwise).

The source: Whistling Train Farms. (Tamara Murphy, chef/owner of Seattle’s renowned Brasa, who famously chronicled “The Life of a Pig” from Whistling Train on her blog, happens to live down the street.) The beer selection includes Session and Sierra Nevada. The pork eventually will be relocated to a curing room that her father is building in another corner of the basement; a similar set-up’s in the works at Boat Street.

Refrigerators Past: Erickson grew up in Woodinville, Washington, when it still had a field of daffodils at its main intersection. The Erickson family fridge was an old-school affair, with rounded corners and a big handle; it was always full of gallons of milk, Tillamook cheese, and home-canned peaches and pears, among other things. Once something fell down into the coil system in the back and set the wall on fire. “The house didn’t burn up, thankfully,” she says.

Further Misc. Reminiscence: “We didn’t grow up on packaged foods. We would spend our summers up on the beach—that was the only time we would get bad cereal. Froot Loops were very exciting. We were spoiled, but we didn’t know it. We ate so much crab, I actually hated it for a while.”

Pet Trick: The Bone Balanced on the Nose, Flipped Up and Eaten Out of the Air, as performed less-than-perfectly by Jeffry. He sees the visitor to the porch with Erickson, wagging farewell. He is afraid of stairs.

Bethany Jean Clement is a writer and editor. Her work may be found regularly in The Stranger.

Find the recipe for ethereal scones on our recipe page.
Find Boat Street online at boatstreetcafe.com and boatstreetkitchen.com.
Find Tamara Murphy’s “Life of A Pig” online at tamaramurphy.typepad.com