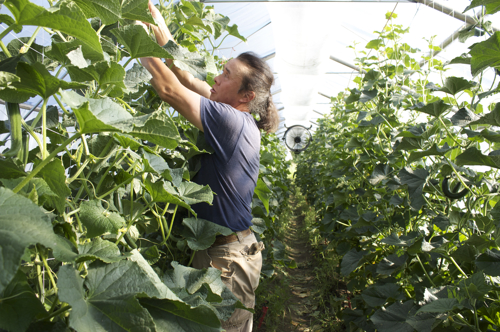 If you ever find yourself at the University District Farmers Market at 8:30 on a Saturday morning, you may see a line of customers in front of the Mair Farm-Taki stand, waiting to buy their fruit and vegetables. The market doesn’t officially open until 9.

“My Asian customers always come early,” says Katsumi Taki, who himself hails from Shiga, Japan. They line up for produce no other local farmer grows—edible chrysanthemum leaves, burdock root, fresh ginger, fuki stalks and Japanese horseradish. These are the seeds of home that Taki now cultivates on 36.5 acres in the Yakima Valley.

“I used to grow the same things everybody else grew,” explains Taki (pronounced ta-kee). “I brought it to market—then I brought it back home.” He realized specialization would give him a greater chance of success and started growing the produce he knew from childhood. Now his stand offers hard to find ume plums in the springtime, and a rainbow of Japanese kabocha squash in the fall.

There was an education process involved in the transition, says Taki, who estimates less than ten percent of his customers are Asian “I brought samples and recipes to show how to cook. Some customers have gone to Japan and want that taste.” Others grew to like his firm-fleshed sweet squash, or the sautéed burdock root (kinpira gobo) they tasted at his stall. There have been converts to the spicy crystallized ginger he dries each year, and his pickled umeboshi plums. Small tastes of a far-off land.

Taki’s journey from Japan to Yakima has been a circuitous one. The youngest of five children of a Buddhist priest, he completed a two-year agriculture course before earning a degree in fisheries biology and working as a biologist for the Japanese government. “I hated the government job,” he says. “It was just sitting around, not enough work.” Taki quit after two years and moved to the southern Japanese islands of Okinawa prefecture, where he became a caseworker working with orphans. Gardening was one of the things he did with the children.

During this time, Taki became involved with a local Christian church. He was baptized in secret—his father threatened to commit hara-kiri (ritual suicide) if his son officially converted. After fifteen years of working with orphans, Taki, now married with three children, was sent to the western portion of New Guinea (formerly Irian Jaya) to teach farming to the locals there. It was an apologetic gesture made by the church for atrocities committed by the Japanese military during World War II.

“I went to many churches in the jungle to apologize,” says Taki. “People told me they had been like slaves to the Japanese military.” Though he had planned to stay for ten years, growing friction between the Indonesian government and locals who wanted their independence made things difficult. When Taki visited a friend who had been jailed for independence work, he was blacklisted by the authorities. It was time to leave.

After a brief return to Japan, Taki and his family immigrated to the U.S., landing first on the East Coast. They came to Yakima to work at Campbell Farm, a 40-acre youth retreat center run by the Presbytery of Central Washington. There Taki helped in the farming program, eventually going out on his own with money borrowed from family in Japan. He purchased the old Mair farmstead, a stone’s throw from the Yakima River in the Wapato area, adding his name to the end: Mair Farm-Taki. The farm now includes orchards, gardens, and a flower-bordered pond with an island and gazebo that can be rented out for weddings.

Though his agricultural training in Japan was based on use of chemical fertilizers, Taki is committed to growing organically. “Organic has a long history,” he explains. “Chemicals have only been used for sixty years.” He points out that chemical fertilizers are also byproducts of World War II. “They get fast growth, but over time the soil is destroyed.” He tells of the dust clouds that come through the Yakima Valley in the spring, when winds whip up the dry soil, degraded from conventional farming. “We have to close the windows,” he says. “The dust gets everywhere.”

But organic farming in Yakima has its own challenges. “At first all my customers came from somewhere else—Seattle, Portland, California.” Not many locals appreciated his organic ethic. Taki tells of an old woman who stopped in front of his stall the first year he sold at the Yakima Farmers Market. “Organic?” she said, and stuck her tongue out at him.

“People know more now,” Taki says. And yet Taki remains one of two or three organic growers in the area. “Some farmers grow organic if price is higher,” he says. “But if price is the same they switch back to conventional. Organic is more work, more paperwork.”

Taki, however, likes work. In the summer he is up by 5am, working until 9pm, getting four or five hours of sleep at night. On Saturdays from May to November, he wakes up at 2am to drive to Seattle for the University District Farmers Market. “I am always the first one there,” he says. He knows his customers will be there early as well.

“You can find Asian vegetables at other stores,” says Mari Fujino, who has worked the Mair Farm-Taki stall at the farmers market for the past seven years, “but choice is limited and the quality is not so great. Taki-san is a perfectionist. Not many farmers would wash their salad mix six times.” Local restaurateurs appreciate Taki’s perfectionism as well. He’s sold produce to Sitka and Spruce, Nettletown, Le Gourmand and Canlis.

“In Japan,” Fujino explains, “appearance and presentation are important.” Taki’s standards are stricter than most. He’s built a plastic hood to cover his display of greens so the lettuces won’t wilt. Produce that doesn’t meet his expectations is sold for a cheaper price in bins marked “Number Two.”

Asian vegetables are not the only draw at the Mair Farm-Taki stall. Pie makers line up for organic sour cherries, expat Southerners snap up bags of okra, others are delighted to find unusual items like bitter melon or currants. Many have come to love his myriad plums, Concord grapes and autumn kabocha squash (he grows eight varieties). “Taki-san likes to surprise people,” explains Fujino. “He likes to bring produce earlier than anyone else.”

Now in his sixties, Taki shows no sign of slowing down. In the winter he works at Essencia Bakery in Yakima—which also uses his produce in their baked goods—helping with the lunch menu and washing dishes. He has no plans to retire. “One day if I feel bad,” he says, “I will dig a hole and crawl into it and pull the soil down on me.” Until then, Taki continues to farm miles away from his homeland, waking up early to greet customers who line up for a taste of far-off flavors.
Tara Austen Weaver writes about food, travel, culture, and the environment. She is the author of The Butcher & The Vegetarian: One Woman’s Romp Through a World of Men, Meat, and Moral Crisis, and writes the award-winning blog www.teaandcookiesblog.com.