On the Cider Route

Bear is holding court, his eyes growing wide under the shade of his baseball cap as he explains he’s spent the morning setting fire to “tent cats” in his apple orchard.

It takes a few minutes before I get the gist: tent caterpillars are predators that can havoc apple trees. The co-owner of Alpenfire Cider has flamed hundreds of their writhing, silky nebulae this year alone, because that’s what you do when you’re a former wildland fire fighter and you’re running an organic cidery.

This is my first stop on the Port Townsend Cider Route, a triangular jaunt that knits Alpenfire with Eaglemount Wine and Cider and Finnriver Farm and Cidery on the eastern end of the Olympic Peninsula. I’m chatting with owners Nancy and Steve “Bear” Bishop in their open air tasting room just steps away from the home they own looking out over their apple orchard, where rows of trellised apple trees appear boisterous in their late-spring finery.

Between pours of ciders with fiery names like “Smoke” and “Spark,” Nancy and Bear tell me about their operation as Washington’s only USDA-certified organic hard cidery. As Nancy tells me, “growing apples organically is the easy part.”

“In fermenting organically you’re taking a much bigger risk,” she says. The organic certification means Alpenfire is prohibited from using preservatives like sulfite to stabilize their cider. Those preservatives also sterilize the flavor, and Alpenfire is after complexity, an element that is apparent as I taste their deeply nuanced, wine-like ciders: the Bishops let their apples shine. One standout is Glow, a tropical rosé the color of dying embers, made with a small, pink-fleshed Hidden Rose apple. I also sample several excellent vinegars with flavors like cabernet and horseradish, some of which are aged up to two years. 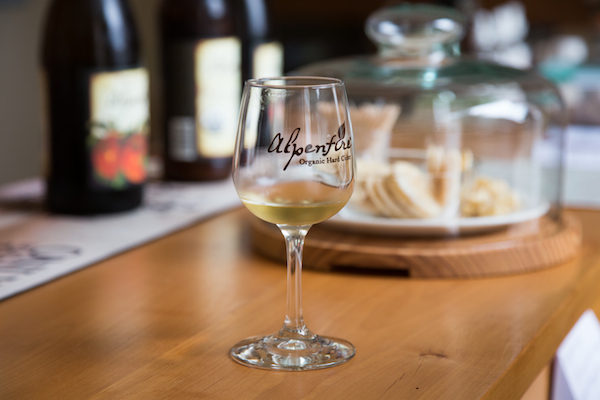 [twocolumns]The Bishops’ history with cider started when they were 19-year-olds in Longview, Washington, making frequent visits from their hometown to Canada.

“We have been cider fans since we were teenagers, pretty much,” Nancy says. “We would go up to Canada when we were nineteen. You couldn’t drink in Washington but you could drink in Canada.” They started making cider as a hobby, though it took them a while to perfect their recipe.

“We didn’t know anything about it at first and we would just make it with our friend’s Red Delicious apples,” Nancy says. “It was pretty bad stuff, but we liked it.”

The couple bought land in the 1990s, with the intention of planting apples and starting a cidery. But Nancy was running a marine canvas business in Port Townsend and Bear was fighting wildfires and they “didn’t get around to it” until 2003. By 2008, they had their first crop of apples for pressing.

After my tasting, Nancy walks me through the orchard, where the later-blooming apple trees are pushing out new fruit the size of rosehips. Somewhere in the surrounding evergreen trees, songbirds offer a gentle chorus. Waves of visitors come and go, parking between the tasting room and the Bishops’ A-Frame wood home. I stay until closing, lingering in the warm sun, the faint smell of salt water drifting in from nearby Discovery Bay.

Hard cider is all the rage these days, though the trend isn’t exactly a new one. Cider has its roots in early U.S. history, thanks in large part to the country’s British founders, who carried the stuff with them when they crossed the pond and settled the colonies. By 1700, the average citizen consumed 35 gallons of hard cider a year, and the tradition was carried westward, helped in part by Johnny Appleseed’s prolific planting of cider apples.

Beer eroded cider production, brought across the Atlantic by waves of German and Eastern European immigrants. Prohibition came next. For a long time after the 21st Amendment, cider was relegated to one lonely tap—if you were lucky—pouring gnarly, super-sweet swill.

But craft cider is booming again, its growth outpacing sales of beer and wine. The industry grew 77 percent in 2011 and 86 percent in 2012, thanks in part to newly gluten-free drinkers who are replacing their beer consumption, and to increasingly adventurous consumers.

My next stop on the cider trail is Eaglemount, 20 minutes south of Alpenfire on shaded roads lined with copper-hued Madrona trees. I follow two sandwich-board signs on Eaglemount Road, turning down a narrow path lined with mature evergreen trees. The road then passes a young orchard planted with English and French apple varieties before arriving at the tasting room. Here, I find Jim and Trudy Davis pouring samples of their cider, along with traditional wine and mead.

The tasting room is cozy and rustic, with a sofa and fireplace and oak-barrel tables. Just past the front door is Eaglemount’s 1883 apple orchard of trees that resemble the majestic live oaks of the Deep South, with limbs that have grown heavy through the ages and slope towards the grass. Those apples were planted to fulfill the requirements of homesteading acts that allowed farmers to claim acreage if they improved the land; fruit trees were a common aspect of that claim. Jim purchased the land back in 1980, abandoned and neglected when he first found it. He refurbished the old cabin and began using the land again. In the mid-1990s, the couple married and Trudy moved in.[/twocolumns] 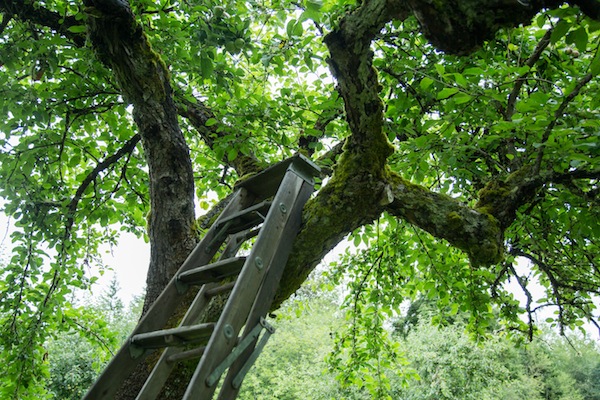 [twocolumns]I taste several ciders, including Eaglemount’s lightly floral raspberry hopped cider and their homestead dry, made from heirloom apples the Davises shake from their old trees. They’re not shy about incorporating other flavors into their ciders—hops, raspberry, and ginger—though they take care not to cover the heirloom apples’ hint of must. With a cider in hand, I walk with Trudy to the original orchard, next to the couple’s lovingly restored 1883 cedar-log cabin. It was these apples that first inspired Trudy, formerly a winemaker, to make cider.

“Come fall, there are apples everywhere,” she says. “I started making cider and it got to be a hobby that got out of control.” That hobby is now “more than a full-time job” for Trudy, who left her winery position to start making cider commercially from the land’s apples, and Jim, a retired longshoreman.

Started in 2006, Eaglemont was the peninsula’s first cidery. Since then their production has grown to the approximately 6,000 gallons of cider and an additional thousand gallons of wine they make today. They often ferment without sulfites, using wild yeasts and organic or sustainably grown apples. Their Homestead Semisweet Cider was selected as best traditional cider by SIP magazine, while their quince and ginger ciders also received awards.

Out in the orchard, I stand among the trees as the scent of freshly cut grass wafts on a light breeze. Swallows glide in the shadows. Trudy seems to lower her voice almost in respect. “I just love these old trees,” she whispers. It’s not an easy spot to leave, but move on I must.

Craft hard cider is made by first pressing apples and then fermenting the juice with wine, beer, or champagne yeast. Some producers make cider that is similar to beer, fermenting with yeast strains commonly used by brewers, while others treat their cider like wine; a few even follow the Méthode Champenoise, borrowing the complex champagne-making process that forms fizzy, elegant cider.

When Crystie Kisler describes her farm, Finnriver, as being “Shangri La, a little piece of paradise,” she’s spot on. I’m enchanted the moment I step out of the car at the farm, cupped by the gentle, verdant curve of the valley. From the wood-beamed pavilion, the blueberry field is visible behind rows of sunflowers and cosmos and zinnias.

It’s a lively summer afternoon at Finnriver, where a local bluegrass band serenades families and picnickers, who supplement their cider with wood-fired pizza from local company Dented Buoy, who sets up shop on Sundays during the summer months.[/twocolumns] 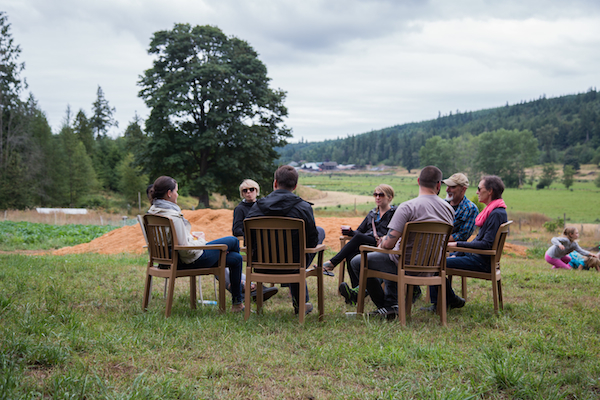 [twocolumns]Crystie and husband Keith, along with co-owner Eric Jorgenson, bought the 33-acre farm in 2004 with the help of some unique financing: owners of a neighboring farm became business partners and the sellers, Elijah and Kay Christian, agreed to carry the contract. Their land is just seven miles from Eaglemount.

“It meant we didn’t have to go to a bank, and that right there, that little piece of radical financing, has really changed our life over the last ten years,” Crystie says.

It soon became clear, however, that their plan for a small produce operation wasn’t going to be successful without some help. “It wasn’t going to be enough to support our family and to support the kind of vital small farm model we wanted to create where people were actually getting paid for working the land and also that was creating jobs and creating rural vitality,” says Crystie.[/twocolumns]

[twocolumns]That model grew first, and most successfully, with the cider. Elijah, who had long ago planted an apple orchard on the land, shared a bottle of his own, homemade cider, and it turned out to be a revelation.

“Keith was excited just from the angle of being a farmer with apple trees who realized he had something on the land he could ferment. For me I was delighted because it seemed like a wonderful piece of history,” Crystie says.

Finnriver’s exceptional cider includes off-beat creations like black currant lavender and habanero.   Crystie credits their creativity with simply not knowing any better. “Because we’re out there in the woods at the end of a little dirt road we didn’t really know what the rules were and so we didn’t experience any internal restrictions,” she says. “But we seem to be making some far-out cider.”

The larger philosophy at Finnriver is rooted in caring for the land rather than leaching resources. “As a working farm, we want to balance production with preservation,” Crystie says.

In addition to growing crops and raising animals organically, they’ve also set aside land for conservation, in partnership with the Jefferson Land Trust. Finnriver has continued restoration efforts to protect a twelve-acre swath for riparian habitat, which in turn keeps healthy an active Coho salmon stream on the land. And they encourage visitors to spend some time here, recharging and breathing the fresh air.

After walking the farm, from the pavilion to Chimacum Creek to the pig pen with a peak-a-boo view of the Olympic Mountains, I spread out a picnic blanket and the locally-made jerky and strawberries I bought at the Chimacum Farmers Market that morning, along with some thyme and white pepper goat cheese from Mystery Bay Farm, just 12 miles from Finnriver.

I crack open Finnriver’s honey meadow cider, a spring release made with the lemon balm growing a few yards away, practically a bottled version of the farm with its bright floral notes and essence of earthy honey. It’s a new twist on a very old tradition, as old as the homesteaded hills that surround me.

Megan Hill is this close to leaving the city behind and moving to an apple orchard somewhere in the great wide open.[/twocolumns] 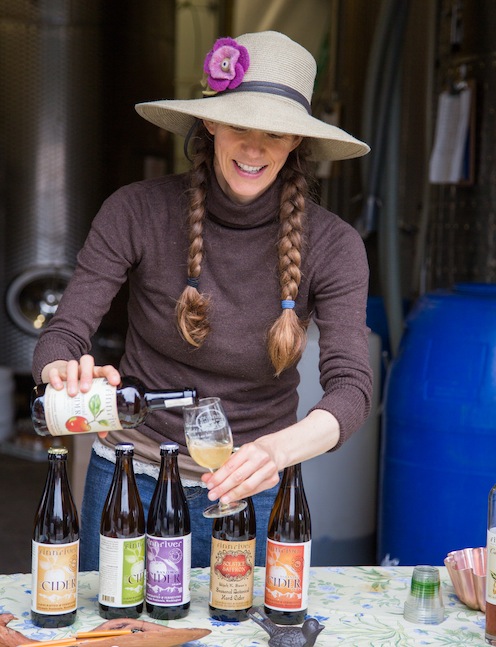 Eaglemount Wine and Cider:
Tasting room open in summer, Wednesday through Sunday 12 to 5pm and in winter on Fridays, Saturdays and Sundays from 12 to 5pm or by appointment.
2350 Eaglemount Road, Port Townsend.
eaglemountwineandcider.com

Fireside Restaurant at the Resort at Port Ludlow:
Upscale breakfast, lunch, Sunday brunch,
and dinner, plus summer farm dinner series.
Open Sunday through Thursday 7am to 9pm, Friday and Saturday 7am to 10pm.
portludlowresort.com

Port Townsend Farmers Market:
Saturdays April to December, 9am to 2pm and Wednesdays 2 to 6pm July to mid-September.

Chimacum Farmers’ Market:
Sundays June through October, 10am to 2pm.

Port Ludlow Farmers Market:
Fridays May through September, 1 to 5pm.

The Inn at Port Ludlow:
Farm Tour Package includes accommodations and “farm bucks”
to purchase produce throughout the area, which Chef Dan Ratigan
will transform into multi-course meal.
portludlowresort.com