Recipe by Jeffrey Vance, Executive Chef at No Anchor and Navy Strength

Sift flour and salt into the bowl of a stand mixer. With the dough hook attachment, mix on low while slowly adding beaten eggs. After the eggs are completely incorporated, slowly add the beet juice until a uniform dough forms. Knead on low speed (or by hand) for 15 minutes until dough is glutenous and no longer sticky. Let dough proof in a warm part of the kitchen for 1 hour.

Peel potatoes and cut into large pieces. Boil until fork tender but not mushy. Drain the potatoes, then rice or break them apart with a fork until consistently broken down. Add butter while the potatoes are still warm. Add mushroom stock and cool to room temperature. Then fold in fromage blanc and chives. Season with salt and pepper to taste, and chill in the fridge.

On a floured work surface, roll out beetroot dough to about 3/16-inch thickness. Using a 2-inch round cutter or water glass, cut dough into 2-inch rounds. Spoon about a tablespoon of filling into each round and fold in half, forcing any air out of the dumpling. Seal shut with a small amount of beaten egg mixed with water.

Boil the dumplings until they float. You can serve them as-is or pan fry them in a small amount of butter. Serve with creme fraiche, dill, and chives. 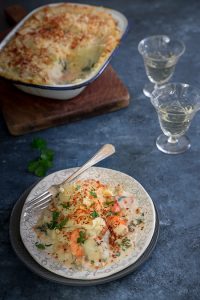