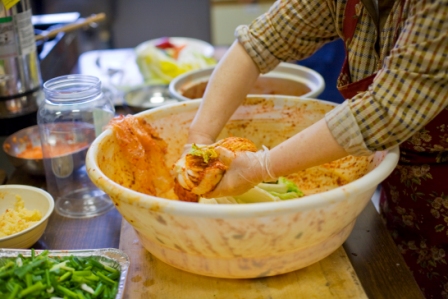 Makes One Gallon
Set aside a day to make kimchee, although much of that day is spent waiting. Expect your kimchee to last about 2 weeks
before going sour. You’ll need a pair of plastic gloves and a one-gallon tub for brining.

To Brine the Vegetables
Brining times are variable. The objective is to produce a uniformly salted and wilted cabbage head.
Dissolve 1 cup kosher salt into 1 gallon lukewarm water in a non-reactive plastic, glass, or stainless steel tub. Set aside.
1 large Korean radish (about a pound), julienned, tossed with 1 tablespoon salt and set in a colander to wilt. Set aside for use in seasoning blend.

2-3 fresh, firm whole heads of Napa cabbage (about 6 pounds worth).

Trim chunky excess off stems and discard any discolored outer leaves. Cut in half lengthwise.Hold the cabbage half stem
side down over the brine. Using your hand, pour brine over the cut side, making sure the brine gets between each layer of
leaves. Repeat, until all cabbage halves are brined.

Place the cabbage halves in the tub of brine, arranging the cabbages so the stems are in the solution and the cabbage halves are leaning down, touching as much solution as possible. After 2 or 3 hours, check the cabbage for any unwilted sections, especially near the stem. Sprinkle salt on these areas and then rearrange the cabbage halves, turning them over so another side is exposed to brine. Let stand another 2 or so hours.
Rinse the brined cabbage under cold running water. Taste after the first rinse. If the cabbage is too salty, rinse again. Repeat up to 3 times, but do not rinse more than four times.
Shake off excess water and place the rinsed cabbage in a colander, cut side down, for draining. Make sure all excess water drains away.

To Make the Seasoning Blend
While the cabbages are brining, make the seasoning blend.
Rice Flour Slurry: Dissolve 1 tablespoon of rice flour in 3/4 cup water. Mix well with a fork to remove any clumps. In a small saucepan over medium heat, bring to a hard simmer, then immediately lower to a gentle simmer, stirring constantly until it turns shiny and smooth. Set aside to cool while you make the seasoning paste.

First, make the slurry. While it cools, prep the ingredients for the paste.
In a food processor, combine the onion, red bell pepper, and jalapeno, scraping down the sides, until thoroughly blended and soupy, about 1 minute. Place the mixture in a large, non-reactive bowl. Add the completely cooled rice flour slurry and combine well. Wearing rubber gloves, add the following ingredients in order, combining gently but thoroughly with your gloved hands after each addition: fish sauce, chili powder, garlic, ginger, wilted radish, carrots, scallions, sesame seeds.

If you are after authenticity, use both MSG and the sweetener. Add a pinch or two of MSG to your spice mixture now and combine. Sugar can throw off the fermentation process, so use artificial sweetener. Only half a packet is needed, but the difference it makes is significant.

To Assemble the Kimchee
1-gallon pickling jar, washed in hot soapy water and dried
Again using plastic gloves, slather each leaf layer of the wilted cabbage halves with the seasoning paste, making sure to put a little more down near the stem. Keep an eye on proportions so that the paste is evenly distributed between every cabbage head. Fold the seasoned cabbage in half and place it into the jar. Pack the rest of the seasoned, folded cabbage halves on top.

The jar should be tightly packed, with as few air pockets as possible. Leave an inch or two of space at the top and cover the opening of the jar with a layer of plastic wrap that is large enough to be screwed in place by the lid.

Let the jar ferment in a cool shady spot for 1 to 2 days, then refrigerate. Slice before serving. 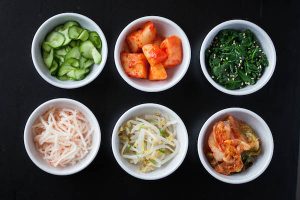