[twocolumns]Jason Yerger started brewing beer out of desperation. When he was diagnosed with a gluten intolerance in 2007, the craft beer lover struggled to find anything on the market worth drinking.

“Beer was the one thing for which I couldn’t find a good gluten-free version,” he says, “so I set out to make my own.”

Yerger turned to little-known, barley-free beer styles like gruits and braggots, enlisting help from fellow brewers in online communities and learning as he went. He started a blog about his experiences. It was this blog that brought him to the attention of two Seattleites looking to start a gluten-free brewery.

Randy Schroeder and Brian Thiel had been home brewing together for several years and tossed around the idea for starting their own brewery. Like Yerger, they had noticed the dearth of quality, gluten-free beers on the market and saw a business opportunity.

Still, they didn’t feel confident enough with their own gluten-free brewing skills to take on that task. As they planned the business, they looked for someone with more experience to run the brewing program. Finding Yerger was the last piece of the puzzle. After reading his blog, they emailed him with an offer to be their brewmaster.

Despite a growing market for gluten-free versions of everything from pasta to pastries, the realm of gluten-free beer is a shadowy one. Most beer on the market is brewed with malted barley, a type of wheat that provides the sugars needed for yeast-driven fermentation. Not only that, barley gives beer its color, body, and texture. With few exceptions, making beer without barely is akin to making wine without grapes.

Hard cider is often looked to as a substitute, but for people who love beer, even the best cider—including those with added hops—just doesn’t cut it. The guys at Ghostfish are trying to capitalize on a growing market of gluten-free consumers who are desperate for craft beer.

Ghostfish’s taproom—in sight of its 15-barrel brewing system—opened in January, making it the first of its kind in Washington and one of just a handful in the country. The taproom offers pours of Ghostfish’s beer, along with a few locally-made ciders and beer, and the kitchen serves an entirely gluten-free menu. Ghostfish is utilizing a mobile company that brings canning equipment to the brewery, eliminating the need for Ghostfish to store pallets of cans and large pieces of expensive equipment. For now the brewery is self-distributing, though they hope to outsource that as they expand to new markets.[/twocolumns]
“We’re kind of can guys because aluminum is just way more planet-friendly and it preserves the product better,” Schroeder says. “There’s no UV, no oxygen, just a better package. And today’s cans are so much better than the tinny-tasting Coors Light cans in your grandfathers day when we always thought cheap beer came in cans.”

[twocolumns]Ghostfish brews with millet and buckwheat, two grains that naturally lack the gluten protein so many are avoiding. The grains are malted by Grouse Malting and Roasting Company, a dedicated gluten-free facility in Colorado. The brewery is starting with three flagship beers: a pale ale, a stout, and a Belgian-style witbier.

Some breweries are marketing “gluten-removed” beer that is brewed with barley and later put through a process that claims to make the beer gluten free despite its base. It’s a process that Ghostfish has vigorously refuted: the gluten-removal process is not FDA-approved and Yerger says this type of beer has made him sick. “There’s no medical evidence that process is actually safe,” he says.

Millet and buckwheat work together to create a flavor and texture that is very similar to that of barley, Yerger says. “It’s got a very mellow, smooth, full-bodied flavor,” he says. “It’s maybe a little lighter in body than a typical barley beer. But other than that, we’ve had nothing but positive feedback on this.”

Ghostfish hopes to eventually source their grains from Washington, including quinoa, which a growing number of Washington farms are planting. Though currently more expensive than other grains, “it’s a great ingredient for beer,” Yerger says. He hopes that, as more quinoa is available locally, it will become more economical.

Other than the base ingredients, much of what takes place at Ghostfish looks just like what you’d find at any other brewery. They’ll be able to branch out into a range of styles, adding seasonal specials, experimenting with single-hop varieties, and expanding their year-round offerings.

Most early gluten-free beers were brewed with sorghum, a gluten-free grain that can lend an unwelcome, overly sweet flavor to the beer. But now, Yerger has a much deeper toolbox.

“We have this tremendous variety of roasted, malted, gluten-free grains available to us,” Yerger says. “Basically, we have gluten-free alternatives to all the specialty grains that craft brewers have with barley. That’s something that early gluten-free breweries didn’t have and their flavors were way off from a traditional barley beer. This is kind of a watershed moment in gluten-free brewing, to have ingredients like this available. This is what makes our beer special.”

Despite these improvements, Yerger says, “We don’t know exactly what kinds of flavors these grains will produce together. We just have to throw a bunch of stuff together and take notes and make adjustments. It’s a scattershot approach. We’re basically inventing beer again for the first time.”

The three men behind Ghostfish are betting their careers that reinvention turns out to be delicious.[/twocolumns]

As a beer lover with a deep-seated fear of developing a gluten intolerance, Megan Hill appreciates Ghostfish’s public service. 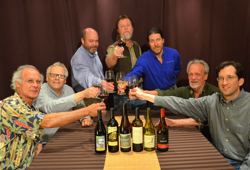 The Winery Alliance of Bainbridge Island 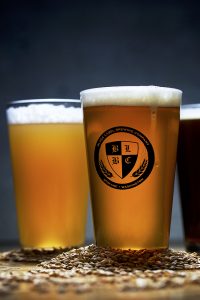 From Grain to Glass 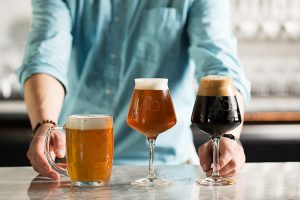 Love in the Time of Craft Beer