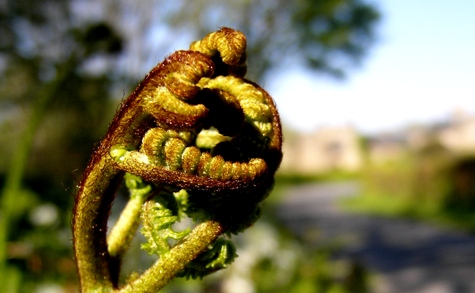 Before I went hunting for fiddleheads with my father, who is a slight, 72-year-old Korean man with the stamina of a pack mule, I had harbored several pretty but misguided illusions about the process.

To begin with, I thought that the experience would be a literal walk in the park. More specifically, Olympic National Park, where, he’s told me—several times and quite emphatically—the most delicious fiddlehead ferns in the world are to be found.

“Abba (Korean for dad, not the name of the Swedish pop group), we’re headed east on 530. That’s nowhere near Olympic National Park.”
“Who said we’re going there? You can’t pick gosari there—it’s a National Park. It’s illegal to pick plants in a National Park.” He spoke with the righteous indignation of a converted sinner.
“But you told me the best fiddleheads come from there.”
“No, I said the best gosari come from state.” He paused. “And in . These fiddleheads are very meaty tasting and fragrant, like beef heart or tongue, mixed with mushroom. Washington and Jejudo are the two best places in the world for fiddlehead ferns.”

Instead of Olympic National Park, which he admitted was well-known among fiddlehead aficionados—not that he’d ever picked there—he was taking me to another one of his secret foraging grounds. This one was legal, located off a rural road south of Darrington, about an hour northeast of , in the shadow of .

This is where my second fantasy about fiddehead foraging was deflated. I had imagined a hushed quest through a mossy canopy of giants, the two of us pausing now and then to pluck a precious tendril. I would marvel at my father’s uncanny ability to spot them. We would cradle our small cache—perhaps a couple dozen or so little curls—grateful we had chanced upon any at all. I would learn something soulful and mystical about our father-daughter relationship.

The car skidded to a stop; I was practically hanging out the passenger-side window, my complexion a shade of green not unlike the fiddleheads we’d be finding. My father’s vertiginous driving—one foot on the accelerator, another on the brake, at all times—had gotten me in the gut once again.

Right there, on the side of the road, was his secret foraging ground—a secret shared by the dozen or so other spry elderly Koreans who were already there, picking in light patches of shade under some shrubs and yakking away.
“The hunting is really good today!” a lady shouted happily. She was squatting low to the ground, wearing a floppy hat and gardening gloves, and plucking with such alacrity she looked like she was pulling weeds.

Bracken fern, the species of fiddleheads we were foraging for, are indeed considered prolific undesirables. Methods to control them include cutting, crushing, livestock trampling, burning, and plowing. According to my father, a license used to be required to pick them, with the limit five gallons per person. “But the rules keep changing, because bracken ferns grow like weeds. Even the park rangers don’t always know what to do about them. ”

He directed me to a patch of fiddleheads—so plentiful, they looked like a field of hairy alien tendrils furling up to grab the unsuspecting hordes. He pulled out a garbage bag and crowed gleefully. “We’ll be able to fill this in just a couple hours!”
“Bend it until it snaps,” he demonstrated with a quick flick of his hand. Some of the fiddleheads broke off at six inches, others were a little longer or shorter. The shoots parted easily and cleanly from the stalk, just like the way the green of an asparagus separates from its woody stem.

“Just take one from every plant—that way, we can come back in a couple weeks and get another harvest.”
He fell to, with a smile. “This is so fun. Everyone loves hunting for gosari. It’s like finding a new golf ball in the woods”

As a non-golfer, I couldn’t appreciate the simile. But when he told me that dried fiddleheads like these typically cost $25 a pound in Korean grocery stores, I started to relish the buried-treasure thrill of the hunt. There was also a mindless physical pleasure in picking, not unlike popping plastic bubble wrap.

We moved from patch to patch, filling our plastic bag with large Dr. Seussian curlicues. Occasionally, my shoes sank into a damp spot of earth, and I would be surrounded by the faintly fetid loamy stink of all the tiny organisms decomposing in the soil. Such a rich, heady perfume, it made me swallow with anticipation. Because that is exactly how bracken fiddleheads smell and taste—like everything buried deep and dark under the ground welling up to release itself in ecstatic green bursts and sprays, to announce the arrival of spring.

Sumi Hahn is a retired restaurant critic (Times-Picayune, Weekly) who moonlights on www.sumisays.com when she’s not her children’s chauffeur. 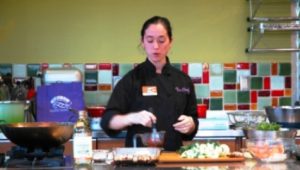 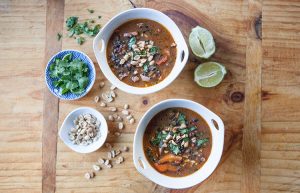 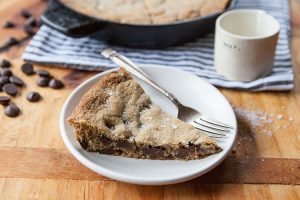