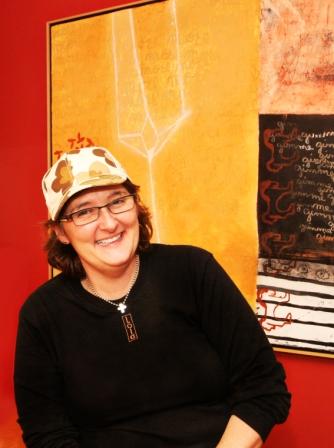 PORK, PICKLED PEPPERS, PINK WINE AND PIE
THE GENIUS OF TAMARA MURPHY
by Bethany Jean Clement
photo by Kelly O
In which Edible Seattle visits the home of a prominent Pacific Northwest chef and reports on the contents of their refrigerator, snacks served, lessons about perfection, meat-sharing endeavors and other miscellany.
THE SUBJECT: Tamara Murphy, celebrated Seattle chef/restaurateur and famous/infamous chronicler of raising and killing pigs on her Life of a Pig blog.

Murphy’s Belltown restaurant Brasa turns 10 years old this March, achieving landmark status in the restaurant landscape. Meanwhile, she’s getting another Seattle landmark sorted out by taking over the café at the Elliott Bay Book Company. This meeting of the literary and culinary minds is cause for civic celebration: The city’s beloved bookstore can now be great in every respect, and the city’s stomachs can get Murphy’s splendid cooking at an egalitarian price point. The café’s up and running, with nothing on the menu more than $10 and special author dinners on the calendar.

FUNKY: At her Ballard bungalow on a weekday night, Murphy’s completely relaxed and perfectly hospitable, even as she says, “I’m really busy. I was at Elliott Bay until about an hour ago.” Originally, her house was a fisherman’s cabin approximately the size of a breadbox; she points out where two add-ons occurred. The original built-in bookshelves, lovely molding, and light fixtures remain, and the walls are full of her artist friends’ work. She was reluctant to schedule the visit, she says—in her two decades on the Seattle restaurant scene, she’d so far avoided home-invasion interviews—since she’s planning a kitchen remodel in her nonexistent spare time. “It’s a work in progress,” she says. “I have a funky little house.” It’s neat as a pin and all charm; her handsome part-Siamese cat Jeff matches the sofa upon which he reclines.

On learning that her refrigerator is to be inventoried, Murphy’s nonplussed. It’s the fridge that came with the house; she’s home so little, she’s not sure what’s in it. “It is a funky refrigerator,” she says. “This is weird.”

BEVERAGES IN STOCK: Empire Bottling Works Diet Cola: “I’m a big diet Coke fan. I’m looking for one that doesn’t have what this has in it”—aspartame. “That I don’t want. I’m drinking them because I have them, and, you know, whatever.” Two Fat Tire beers. Bossa Nova Superfruit açai juice: “I drink these a lot. I drink anything that’s kinda healthy.” Light soymilk. A bottle of Bugey Cerdon sparkling rosé: “I don’t even know what this is; it was a gift. But pink is great. I love pink.” With an impressive pop, it becomes the beverage served: “Cheers.”

THINGS FROM GIFT BASKETS: Murphy’s got organic olive oil mayonnaise, a big squeeze bottle full of lemon juice, flour tortillas, a plastic container partially full of pomegranate seeds. When it comes to the Woodring’s black currant fruit spread, she says, “When you do a lot of events, you get a lot of things in baskets.” Looking further, “That was basket, that was basket,” she says. There’s never-opened cherry zinfandel fruit spread, and something called Olive and Herb The Bread Dip (“Definitely basket”). A small jar of jalapeño jelly was a gift from Robin Leventhal, chef/owner of the recently closed Crave. It’s dated 7/07, which makes Murphy laugh.

Another non–gift basket item: Dalmatia fig spread (“That’s a really good fig spread”), purchased at Whole Foods. She also loves “Howard’s peppers”—Mama Lil’s Peppers, made by Howard Lev. “You know, Howard started his company in Campagne [where Murphy worked for six years before opening Brasa]. Howard and I go way back, so I always have his stuff on hand. He used to clean the peppers in the kitchen at Campagne.” She’s got King Chi hot sauce, as well as Tapatio (“Everybody has to have that”). As for the La Victoria green taco sauce: “It’s what I grew up with…a lot of Velveeta…lots of processed stuff,” in North Carolina.

IT’S EITHER PERFECT OR IT’S NOT: “Actually, my first real restaurant job was with a husband-and-wife team who had a restaurant called Mangione’s, and it was inCharlotte, North Carolina. She was the one that taught me a lot about fresh ingredients.… I actually started there underage, unbeknownst to them, in the bar. And one of their cooks didn’t show up. And she pulled me through the doors from the bar that went into the kitchen, and she said, ‘You gotta cook.’ I was terrified. Anna Mangione was her name. She used to smoke More cigarettes in the kitchen. They’re long! She was an amazing woman, and they just took such great care of me.

“We used to cook dried pasta, and the first time that I actually had the job of cooking all the linguine, all the spaghetti, I cooked it all—and we were cooking like 20, 30 pounds of each—and I overcooked them. And she threw them all in the garbage. And I said, damn! I just couldn’t believe it. And she said ‘No, it’s either perfect or it’s not.’

“I was 15 years old. They also used to get legs of veal, and in the summertime—in season—they would pick up all this stuff. We did all traditional things, saltimbocca, shanks.… They were from Sicily.”

THE FREEZER AND THE LUCKY NEIGHBORS: In the freezer are a couple of beer glasses chilling and a great deal of meat. “I have my pigs in here,” Murphy says; since her blog project in 2006, she’s remained involved in the life and death of the pigs she eats, serves, shares. Even frozen, the meat is rosy and remarkable. It’s packaged and some is stored at Better Meats—”right up here on 83rd and 3rd, he’s just been a great guy.” Additional storage is close at hand: “My neighbor right next door, we share a freezer, down in their basement, because they like pig. They wanna eat good stuff. It’s the best.

“What I’ve been trying to do with my neighbors is buying whole cattle, whole pork. A lot of people want to know where they can get this kind of thing, and it’s not easy. You have somebody like me in the neighborhood, and I’m like, okay, we can buy a whole cow and let’s divvy it up. They’re overjoyed. We need more of us like that; it’s wonderful. We’re really doing something that’s not a commercial sort of deal—it’s a little bit underground. But it works. I share my pigs and my beef with probably 30 different families. And we all do our part. People want an easy way to get the product, but it’s not there yet.”

Murphy’s also at pains to point out a protégée’s work in the freezer: “And of course I have Pies by Jenny [Christensen]. She cooks at Brasa—I mentored a pie baker,” she says, pleased. “It’s local ingredients and farmers’ ingredients. This is a Turkish goat pie. We have probably about 30 different products.”

SNACK SERVED: Murphy’s got her green chili pork heating on the stove; it’s currently on the menu at Elliott Bay (see recipe, and note that at her house, it had hominy in it—an excellent addition). She garnishes the bowls with cilantro, feta cheese (“Because I’m out of cotija”), and squeezes of lime. She heats up tortillas directly on top of a gas burner. The green chili pork is outstanding: rich and spicy but not too hot. “None of it is about blowing the top of your head off—it’s about flavor,” she says. And, a little later, with both pride and awe: “This is my pig.”

Life of a Pig: tamaramurphy.typepad.com

Bethany Jean Clement is a writer and editor. Her work may be found regularly in The Stranger, and in the 2008 Best American Food Writing. 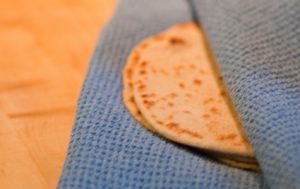 In the Kitchen: Sutra