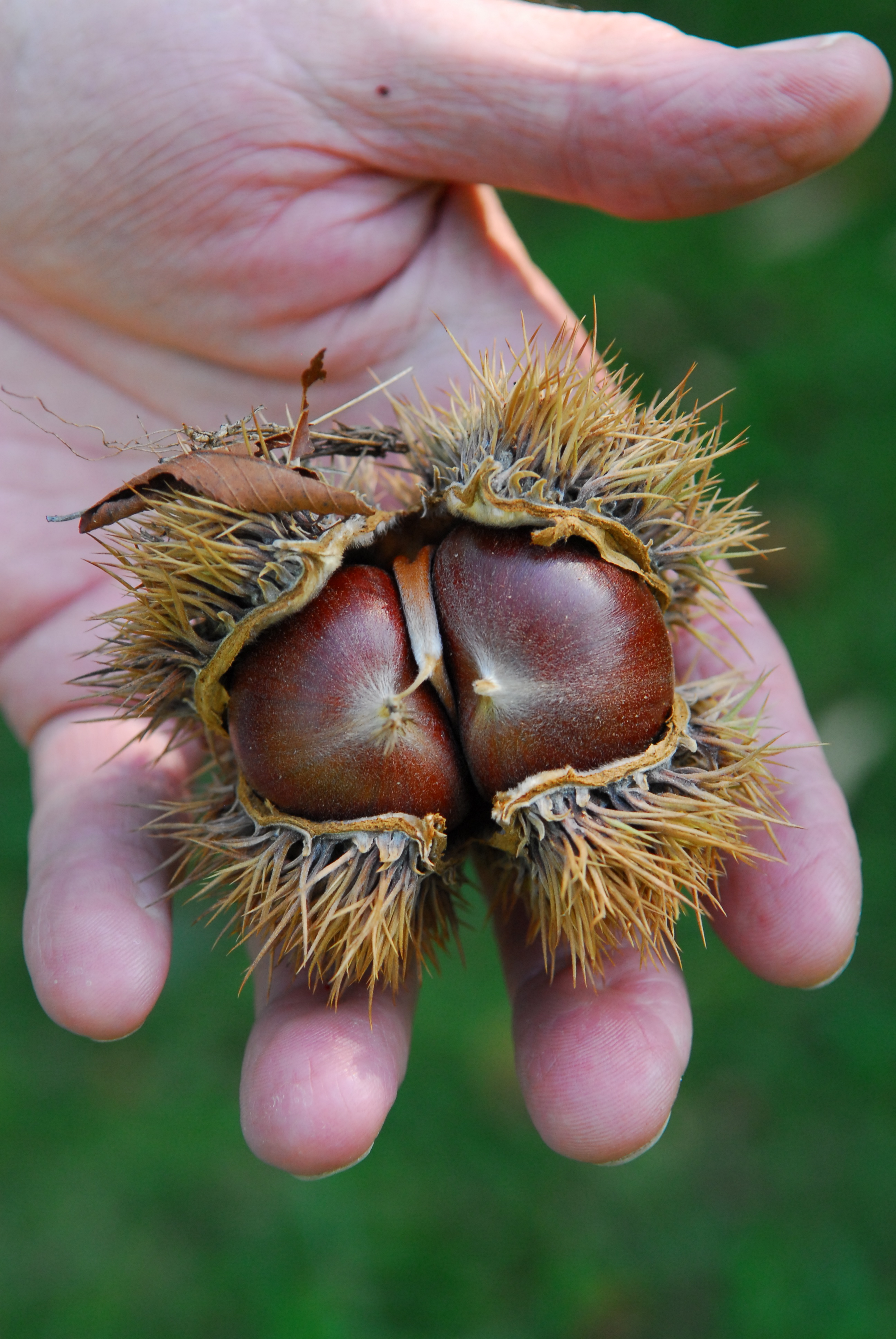 [twocolumns]When I was a child I used to spend Thanksgiving with my grandparents in North Carolina’s Smokey Mountains. My Grandpa was too old to walk with me, so I explored for him. Red and brown and orange leaves covered the ground and nuts and berries and rocks (and those pretty leaves) filled my pockets. When I got back to the house I spread my treasures out on the kitchen table and my grandpa had a look.  “Do you know what that is?” My Grandpa pointed a wobbly finger at a deep brown, smooth round shiny nut. “A chestnut?” I asked, something I’d imagined but never seen.

My grandpa smiled. “Close. A horse chestnut. You can’t eat them, but they feel good in your pocket.” He rolled it over in his palm and then he leaned back in his chair. “This whole area used to be covered in real chestnuts, though. Big, beautiful old trees. But there was a blight.” He sighed. “Now every last one of them is gone.”

Before the blight, American chestnut trees used to be plentiful, and large, between 50 and 100 feet tall and as much as 14 feet wide at the trunk.  Their native range ran from Maine to Alabama and made up between 25 and 50% of Eastern hardwood forests. Their chestnuts were an important source of food for both humans and wildlife. Native Americans roasted them and used them for bread. John Hepting wrote, in The Death of the American Chestnut, “The farmer’s hogs were fattened on [American] chestnuts, and, to no small degree, his children were also.”

The American Chestnut Blight is one of the most massive stories of disease in the history of America’s forests—if not the most. The disease that would change the landscape of half a continent was introduced in New York, around 1900, on nursery stock of disease-resistant Chinese and Japanese Chestnuts. By 1905 the blight—which is a fungus—was identified, but no one knew how to contain its spread. And spread it did, throughout the hardwood forests of the East coast. The blight not only changed what people ate, but what the things of their life were made of. Chestnut wood was desirable, durable, and resistant to rot. Antique stores are filled with it. “Baby’s crib,” Hepting continued, was “likely made of chestnut, but chances were, so was the old man’s coffin.” By 1940, the vast forests of abundantly producing American Chestnuts were entirely gone, and attempted replantings quickly succumbed to the disease. My Grandpa would have been ten years old.

At the age of 10, the only chestnuts I’d ever heard of were the ones that roasted over an open fire, while Jack Frost nipped at my nose. At my grandpa’s house, I was searching for this scene of holidays and home and hearth, on the forest floor. But the chestnuts were gone, a myth from the way family used to be, in past generations. The American chestnut blight caused not only canopy loss, but cultural loss.

I didn’t taste my first chestnut until twelve years later, in Italy. I’d grown up, and moved out, and my grandpa, after a long illness, had just passed away. We were selling the family home.  I wasn’t wandering through the forests anymore, but I was on my own, and lonely, missing the people who made up my life. Everyone felt very far away but the chestnuts I’d always longed for were present and real. The sight and smell of them roasting on every street corner warmed me. I couldn’t speak Italian, but it didn’t matter. All I had to do was hand over a few Euros for a paper cone of whole chestnuts, roasted and warm, like a small sweet potato, sometimes slightly burned from the street vendors’ open fire.  Chestnuts are more like potatoes than nuts. They are the only tree nut that stores energy in the form of carbohydrates rather than fat.  But like walnuts, hazelnuts, and pine nuts, chestnuts are incredibly old. So old that they existed long before North America and Europe split apart some 60 million years ago. This means that there are both New and Old World species. This is largely responsible for the European Chestnut’s resistance to the American chestnut blight.

In Europe, before the arrival of potatoes and corn from the New World, chestnuts were an essential starch. Chestnuts have been grown since prehistoric times, especially in the hilly, marginally fertile regions of Northern Italy and Southern France, where much of the land is difficult to till and plow. There are still regions that rely on the chestnut as a primary starch and flour, and as feed for some of the world’s best meats. In Northern Italy, the chestnut has a rather humble reputation, in part because as a gluten-free starch, breads made with chestnut flour don’t have the same lightness as bread made with wheat flour.

I ate chestnut gruels and flat breads when I was in Italy, and I found them so delicious that leavening did not matter. I ate chestnuts peeled and roasted whole, like potatoes, in the juices next to a ham or leg of lamb. And I ate all shapes of chestnut pasta, some plain, with butter and sage, or heartier, with oxtail ragu. Simple, soulful, filling. But I also found chestnuts among the fanciest of the fancy: layers of smooth chestnut puree combined with airy cake soaked in liquor, or with chocolate and meringue. And there were always marron glacé, whole gleaming candied chestnuts, poached in vanilla syrup, the jewel of the European pastry case. As good as these were, it’s rumored that the American chestnut was even better, in sweetness and in texture. It seems hard to believe. I really can only imagine, along with the rest of my generation.

While I was in Italy, I kept in touch with a man I’d met before I left. We corresponded in food. I mailed him chestnuts, which was, I realize now, probably against the law. But we got together when I returned and a year later he asked me to move in. I still remember helping him pack his kitchen and finding—shriveled and dried in a crumpled brown bag—the huge, smooth, best Italian chestnuts I’d sent.  I held them up. He said he’d used them. He had not. This felt like a significant betrayal.

He shrugged, chagrined. “I didn’t know what I should do with them. I’d never cooked chestnuts before. They seemed difficult. I didn’t want to mess them up. Don’t be mad,” he said, “we can always get more.”

I needed a break from packing. We got our coats and went for a long, silent walk.

He was right, more chestnuts were available. I’d seen them in Seattle and they are cultivated in Washington, Oregon and California. After the blight, when American chestnuts disappeared, orchards of disease resistant Chinese and Japanese chestnuts (two slightly different species) were planted throughout the US.

We walked and walked and found ourselves under some big trees at Volunteer Park. He bent down. “Look,” he said, “there are chestnuts right here.” He handed me a shiny brown nut. I was not a true chestnut, but a horse chestnut, the inedible imitator I’d found so many years ago. I put it in my pocket and though of my grandpa and realized I’d found another man whom I loved.

We went home and finished packing. That holiday season—our first together—we roasted real chestnuts over an open fire, in our new rented hearth. With the leftovers, I made chestnut stuffing for the bird. It’s been our tradition, all the years we’ve been married.[/twocolumns] 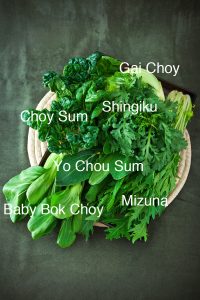