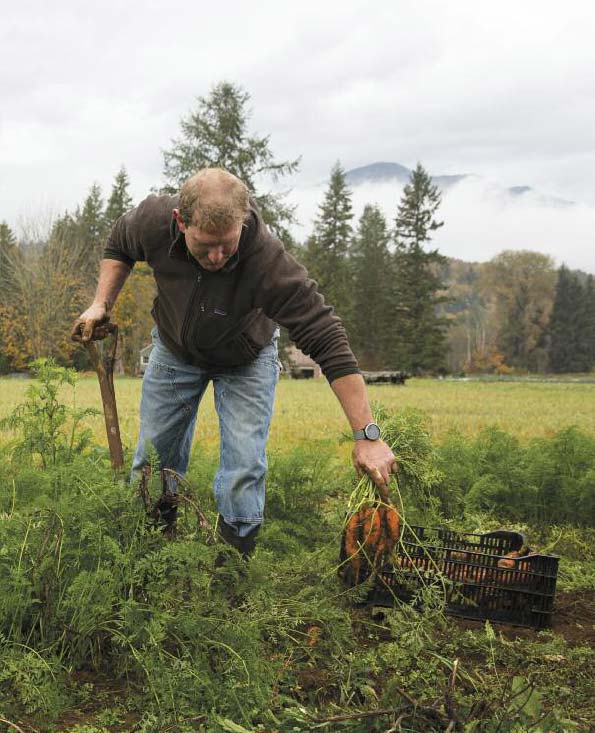 Arran Stark is spending the morning at a farm ten miles south of Port Townsend. The sky is mottled and gray but the air is mild; it’s a good day to harvest carrots. He loosens the soil and kneels to tug at the greens, alongside his wife, Micaela Colley, and a couple of field workers. Up come the vibrant roots — carrots that are dark red, orange, and purple.

As the chef and food-service director at Jefferson Healthcare, the hospital in Port Townsend, Stark is always planning a menu. Today, he’s considering how he’ll prepare a 30-pound surplus of these carrots for patients, visitors, and hospital staff.

Someone hands him a grubby yellow carrot and he breaks it open, revealing sunshiny flesh with a purple star in the center.

“Imagine that in a salad,” he says. “You could just mandoline out a bunch of coins and dance a vinaigrette into it with some apple.” Recipe development comes naturally to Stark, whose profound knowledge of classic techniques and imaginative approach to ingredients are evidence of years in professional kitchens. Before moving to the area in 2006, Stark had built a career cooking at top-tier restaurants across the country. He thought he’d always work in fine dining.

After completing an apprenticeship with the American Culinary Federation in his hometown of Atlanta in the early 1990s, Stark worked in high-end restaurants connected to destination venues north of the city and, later, in Massachusetts and Florida. Over the years, he built skills in hospitality and menu creation through service to moneyed clientele.

After 15 years in the industry, Stark pursued formal culinary training at Le Cordon Bleu College of Culinary Arts in Portland. While he was still a student, Stark was appointed executive chef of Andina, the city’s celebrated novoperuvian restaurant. Soon after, Andina was named Restaurant of the Year by The Oregonian. Business doubled overnight.

The work was exciting, but the hours began to wear on him. Plus, he’d fallen in love.

When Colley accepted a position as executive director for the Organic Seed Alliance in Port Townsend, Stark followed her north.

Freed from 80-hour workweeks, he plowed through one food project after another. He and Colley served local beef burgers out of a mobile kitchen at the Port Townsend Farmers Market. He made evening meals for a popular coffee shop and, later, served prix fixe weekend dinners out of a local bistro. Stark couldn’t stop feeding people.

He and Colley constructed a multi-use kitchen workshop, designed to be a flexible venue for catering, cooking classes, and community meals — the culmination of their farm-to-table vision. But the same week the kitchen was approved by the health department, Colley, who was pregnant with their first child, was diagnosed with breast cancer.

Shortly after her diagnosis, hospital administrators approached Stark, asking him to take the helm and convert the hospital cafeteria to a local-foods model. A steady paycheck and the opportunity to overhaul an institutional food system won him over.

“Being a chef at a hospital is probably the last thing I ever imagined doing,” Stark says, “but I love the platform that it’s given me.” So does the community.

“He was looking to do what we were interested in doing right at the same time,” says Jefferson Healthcare CEO Mike Glenn. “If the administration can get credit for anything, it’s for staying the hell out of his way.”

Jefferson Healthcare is a smaller hospital than many — a 25-bed facility serving a modestly populated area. Still, changing a system that generates 350 meals every day is a challenge. Like most of the nation’s 5,600 registered hospitals, Jefferson Healthcare ordered food through a distributor that delivered warehoused ingredients twice a week. None of it was local. Some of it was dubious. Stark remembers swollen bags of fermenting pre-cut onions.

The nationwide trend to boost the quality of hospital food is growing. According to the international coalition Health Care Without Harm 566 hospitals, including Jefferson Healthcare, have signed its Healthy Food in Health Care Pledge. Worldwide, hospitals are pursuing scores of projects, such as planting on-site gardens, partnering with traditional distributors to source local produce, and offering cooking classes.

Stark’s reforms stem from his earliest experiences in the field.

“My initial attraction to being in the kitchen was just seeing how a kitchen flowed and the brigade system at work.”

He started by retooling the hospital kitchen, replacing the aging electric cooktop, steamer, and convection oven with professional, high-grade equipment. But even in a well-equipped workspace, switching an industrial kitchen from prepared ingredients to whole foods is time consuming. For 18 months, for instance, Stark taught the staff about knife techniques so they could efficiently prepare bulk supplies of slippery onions and roly-poly carrots.

While they learned to slice and mince, Stark set up sourcing channels for local ingredients. To streamline the system, he created an institutional CSA program with nearby farmers at Colinwood Farm, Red Dog Farm, SpringRain Farm & Orchard, Dharma Ridge Farm, and Midori Farm.

He purchases other local ingredients from a range of growers and craft producers. Beef is supplied from two farms in Chimacum. Nash’s Organic Produce in Sequim supplies oats, triticale, and wheat berries. Cape Cleare Fishery’s Alaska salmon is delivered to the hospital by bicycle. Chicken and pork are purchased from the wider region.

Under Stark’s direction, about 90 percent of the hospital’s food ingredients are sourced locally at the height of the season. In the future, he’d like to process and preserve ingredients inhouse for use throughout the year.

To successfully serve so many meals, the method of delivery matters almost as much as the cooking itself.

Before Stark took the position, the salad bar in the dining room “looked like any salad bar 20 years ago,” says Glenn. “Every day, you’d walk by and it would be the same iceberg lettuce and macaroni salads. But overnight, he converted it into something that looks like a miniature version of a salad bar at Whole Foods.”

Stark and his staff stock the bar with fresh daily soups, a parade of colorful salads, and a shifting array of lettuces from local farms. While the self-serve choices are abundant, the hot-foods line is condensed. Stark serves a three-part entree every day (protein-starchvegetable), often putting a twist on a favorite comfort food. He coats salmon in remoulade and quinoa and bakes it until it’s crisp, or he tucks Mt. Townsend Creamery’s smoked jack cheese into his chicken cordon bleu.

Stark believes that limiting meal options can help relieve the stress of a hospital stay.

“If you put a big menu in front of people, they think it’s liberating to have a choice. But I actually think it’s the opposite.” He smiles. “‘Here it is. Sit down and eat.’ That’s how I like to feed people.”

He also likes to pamper guests — and patients, when he can. The cafe serves food made by local specialty purveyors, including Elevated Ice Cream, Mt. Townsend Creamery, Midori Farm, Pane d’Amore, Bob’s Bakery, and Sunrise Coffee.

The kitchen updates classic hospital foods, too. Puddings are made from scratch. Instead of Jell-O, there’s a house version with collagen and Columbia Gorge Organic juices.

When Stark arrived, the dining room was a drab space with gray carpet. The hospital renovated the space, which now looks more like a cafe, with warm wood accents and an abundance of indoor plants.

Aesthetics are important for patients, too. When a chemotherapy patient requested watermelon, Stark liked the pop of color on the plate and made it available to patients until it went out of season. He also works closely with the hospital dietitian and patient concierges to meet specific dietary needs, particularly for post-surgery or cardiac patients.

“The whole idea of attracting people to the hospital for wellness is a good idea,” Stark says. “I want to be the hearth of the town, where people can come get a relatively inexpensive, really nutritious meal.”

But Stark’s ideas go far beyond a nice bowl of stew. Third-shift workers now have access to a stocked grab-and-go cooler. The hospital cooks meals for senior citizens through a partnership with a local agency. Stark teams up with a local professor to offer educational programs that explore historic ingredients. In the future, he’d like to train young adults in food preparation, hospitality, and service.

And he’s looking toward the day when hospital providers will prescribe cooking classes for their patients (he has already worked out an itinerary).

In short, Stark will do almost anything to fortify the connections between people and good local food.

“He’s an extraordinary chef and food-service director, but he’s a better human being,” says Glenn. “His passion and sincerity about this is impossible to miss.”

Jennifer Crain lives in Olympia, where she writes about the production side of the regional food system. Find out more about her work at jennifercrain.com.

From Cows to Curds 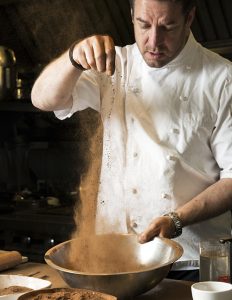 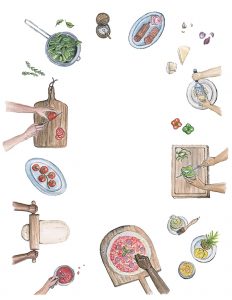