How does an itinerant naturalist roaming through the 1970s, and living on $300 a month in a treehouse in the 1980s, become the founder of a trailblazing, multi-million dollar company in the 1990s? It certainly wasn’t end goal for Seth Tibbott, the founder of Tofurky. But through 40 years of hard work, intense bootstrapping, life lessons, luck, innovation, aligning with good people, and staying true to his values all along, Tibbott became a delightfully unexpected success story. You don’t have to be a vegan to recognize the Tofurky brand, a pioneering vegan company known worldwide for its line of plant-based sausages, sliced meats, and yes, the namesake holiday roast that was such a groundbreaking product.

Tibbott’s peripatetic story is one that any vegan, hippie, or natural foods brand founder would find particularly inspiring, but even more so, it’s one that any entrepreneur can learn from (and would likely be a better person for it). Tofurky has a refreshing brand origin story that didn’t have a clear path or direct trajectory, and was shaped by Tibbott’s relationships, community, and good doses of well-deserved kismet. His journey took a long time to lead to fruition, so his story can lend hope to any fellow “bootstrapper misfits” out there who have a passion and a vision to keep on keeping on.

Tibbott came of age in the 60s and 70s, exposing him to the very first sprouts of plant-based food, communes, natural foods, an ecological worldview, civil rights, and seeing the possibility of having a business be a force for good, instead of just making money. In his recent book, In Search of the Wild Tofurky, he shares a pivotal moment during his time at Wittenberg University in Ohio: he was served a vegetarian meal that ended up being an epiphany for him—a simple meal of “lentils, rice, and onions that [his friend] Laurel had found in Diet for a Small Planet by Frances Moore Lappé.” She compellingly talked about the importance of eating lower on the food chain and using less resources, which inspired him to stop eating meat. He had to learn how to be a “good vegetarian,” and make nourishing foods like whole grain bread, granola, and yogurt—a stark contrast to the overwhelming number of options we take for granted now.

He dropped out of college for a bit (the path he was following to become an elementary  public school teacher wasn’t proving to be in right alignment for him), but after a couple inspiring stints as a naturalist teaching kids about the outdoors and ecology, he returned to finish his degree. After graduating, Tibbott and his roommate headed west to Oregon without a plan, because that’s the kind of thing you could do then, and he fortuitously found work as a naturalist. He’d bank his six months of meager income, and spend the other six months as a frugal nomad on the road, sleeping in a tipi or friends’ barns.

A summertime job as a naturalist at a Youth Conservation Corps camp near Greenville, Tennessee, brought Tibbott in close proximity to The Farm in Summertown, a commune south of Nashville founded by Stephen Gaskin, a counterculture icon Tibbott admired. It’s where Tibbott learned about tempeh, a protein-rich, fermented soy food from Indonesia “made by mixing the dried spores of Rhizopus oligosporus mold into a batch of lightly cooked, dehulled soybeans. Then you cover the beans and let them sit overnight in a warm place. The mold binds the beans together into a solid white cake that you fry slowly in oil or margarine.” Tibbott procured a starter culture from The Farm, a rare thing then, and it proved to also be the starter for his path in the natural foods world.

The timing was just right: he was in his late twenties, and was getting antsy, wondering about his life’s purpose and his path. He saw a future in tempeh, offering vegans and vegetarians a new protein source (although his family tried to dissuade him from “selling moldy soybeans”). He returned to Oregon and founded Turtle Island Foods in Forest Grove on $2,500 savings, a sum he managed to stretch much farther than most could, thanks to his years of practice in scraping by. His tempeh was delicious enough for his local Indonesian restaurant to be excited about it, and he went on to invent “the country’s first ‘five grain tempeh,’ which was made with organic soybeans, millet, rice, sesame, and sunflower seeds. Then [he] created a sausage-shaped tempeh cake that came with a blend of herbs de Provence that [he] called “Tempehroni.” There were also Superburgers, and KISS (Keep It Simple Stirfry) marinated tempeh cubes.

In his book, he shares many lessons learned while building his business, and the inherent challenges and internal fortitude required to be an ethical pioneer—not only was he speaking to a niche and nascent market, but he had to educate consumers and create demand for a product that was very unfamiliar. You could say Tibbott learned the hard way—instead of taking some intro to business classes, he learned about business directly through his mistakes, figuring out the challenges of scale, funding, distribution channels, production, and how to delegate, things every entrepreneur can relate to.

But this all proves key to his ultimate success: since Tibbott did everything himself initially, from production to sales to deliveries in his beater Datsun wagon (he’d latch the driver’s side door with a bungee), he really knew the market, and his fellow plant-loving innovators. It’s why in 1995, he partnered with his pals Hans and Rhonda Wrobel of Portland’s Higher Taste vegetarian deli on developing a variation of their delicious stuffed tofu roast that he noticed they were making for their customers for Thanksgiving. Turtle Island added tempeh “drummettes,” and for some full-circle-ness, Hans even developed a gravy “made from nutritional yeast, improving upon a recipe first pioneered at the Farm.” And how did he come up with the iconic Tofurky name? Tibbott remembered seeing a sandwich at a Portland deli he used to deliver tempeh to fifteen years prior that made a “tofurkey” sandwich. He called to see if the name was trademarked, which it wasn’t, and he dropped the “e” and the unconventional product was christened (even though everyone at Turtle Island thought the Tofurky name was stupid and “sounded like a sneeze”).

Another marketing move that proved to be prescient was the postage-paid comment card they included with the Tofurky feast—the feedback from their customers helped drive the continual R&D on the product, from trying marinated tofu to seitan (a wheat gluten product), to adjusting the size. It wasn’t an overnight success, but certainly grew at a much faster pace than the tempeh, and by 1997, they sold 18,000 Tofurkys, tripling Turtle Island’s annual gross sales in three years. Since it was such a unique and quirky product, they ended up getting some great press hits, and even though Tofurky has been the butt of many jokes, it all ended up building name recognition and demand.

Tibbott’s ever-innovating spirit and team soon launched Tofurky Deli Slices, and in 1998, after eighteen years in business, they finally made their first profit. (Pop the kombucha!) A trip to Europe and the UK—with the hopes of exporting there—ended up inspiring a line extension of sausages with distinctive flavors: beer brat, Italian, and kielbasa, and how timely, it launched just in time for Memorial Day barbecues.

The Tofurky brand now includes 43 different vegan and cruelty-free products, made with quality, organic, and thoughtfully sourced ingredients, sold in 27,000 stores worldwide. Tofurky remains proudly family-owned, even after numerous offers from investors (it’s worth over $100 million). By maintaining control of their company, they’re able to continue their commitment to purpose over profit, giving back to the community in numerous ways, supporting animal rescues and sanctuaries, animal advocacy and environmental organizations, and fueling the growth of a movement Tibbott helped plant the seeds for. 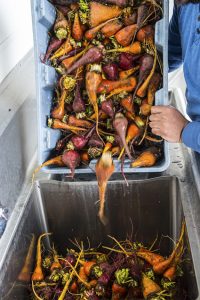 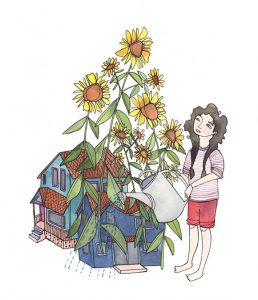