Since 2009, Urban Bee Company has been a hive of activity, selling and talking about a product situated right at the nexus of agriculture and ecology. 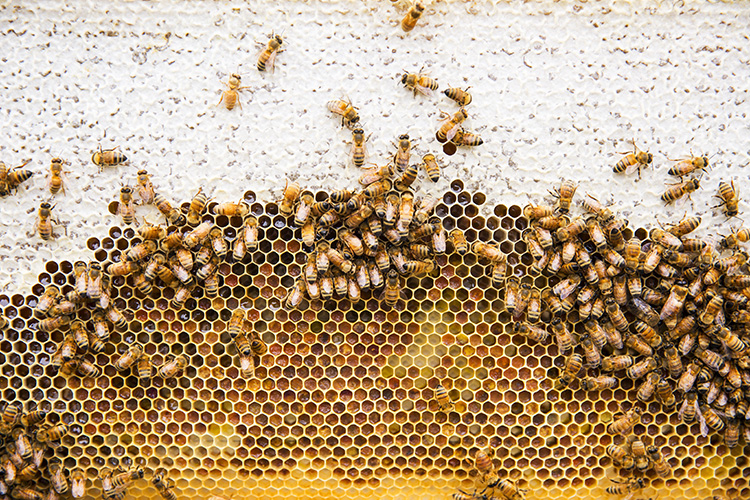 “Beehives are the new water cooler,” Bob Redmond tells me on a warm September morning. “Which is my way of saying they’re gathering spots. It’s the gateway to learning so many different things about agriculture and ecology.”

Since 2009, Urban Bee Company has been a water cooler in its own right, selling and talking about a product situated right at the nexus of agriculture and ecology. Urban Bee’s 125 hives are spread out over 25 sites in Puget Sound, from Carnation Farms to Seattle-Tacoma International Airport to backyards sprinkled throughout Seattle. Their hyper-local honey — with labels like “Beacon Food Forest” and “RJ and Lisa’s Yard, West Seattle” — is sold by bike delivery, CSA, and at a handful of shops, including Capitol Hill’s SugarPill and Fremont’s Theo Chocolate.

On the day I tag along with Bob — beekeeper, writer, small business owner, and sayings-coiner — bees buzz to and from the two hives that sit at the Beacon Food Forest, amid blooming mint and echinacea and dark, lovely elderberries, ripe for eating. The Food Forest, located just west of Jefferson Park, began in 2009 as an edible, urban permaculture garden with the goal of providing a place for community members to gather and forage. Bob, founder of Urban Bee Company, along with beekeeper T.J. Main and beekeeper and general manager Leda Perticone, are there to inspect the hives.

“Most of our hives are small ones, like these, that we can use for public education,” Bob says. While hives serve as informal gathering spots, Urban Bee also uses them as sites for talks (with titles like Honey Bees 101 and Bees in Art and Culture), tastings, and in-depth tour-hour field sessions.

“Part of our deal with the bees is, ‘We plant things for you, you make honey, and if there’s any extra, we get that,’” says Bob, who describes a beekeeper as an “adjunct.” It’s a role unlike any other in farming or human-animal relationship. “Bees have no memory or concern for you, yet there’s such an emotional relationship with the hive.”

Bob first got into bees in 2005, while doing a writer-in-residence program at Seattle’s Richard Hugo House, in the historic Belltown cottages. As he sat in the Belltown P-Patch community garden, working on haiku, Bob noticed that the garden’s bees seemed to be doing work of their own. “I liked watching them work,” he says. “They’re one of the most generous creatures — they don’t harm anything. They’re vegetarians, they help plants reproduce, they give us honey — is anyone nicer than that?”

Interest turned to fascination and then to obsession. Unlike guitar-playing or pasta-making, beekeeping is not a hobby one dabbles in — it requires, and perhaps inspires, one’s full dedication. “It was a downward spiral,” says Bob, chuckling before getting quiet. “But it all started by being in a garden and paying attention.” 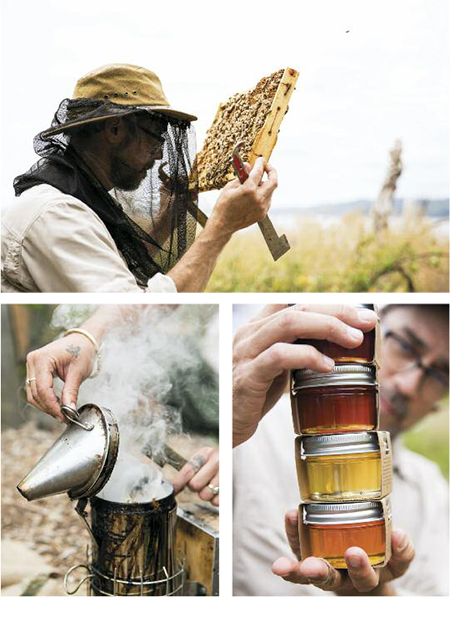 Bob’s obsession overtook his and his wife Amy’s apartment until eventually he approached individuals and organizations to host the hives, first as a hobby and then as a business. These days, Urban Bee comprises six employees, including T.J. and Leda.

“My life has become thinking about, ‘How does this affect the bees?’” says T.J., who was introduced to beekeeping as a teenager by a family friend. “I think, ‘What’s blooming? What chemicals are my neighbors spraying on their plants?’”

Every couple of weeks, a beekeeper checks out each hive, looking to make sure there is a viable (egg-laying) queen, checking for any signs of poor health, and seeing how honey production is going.

The hives, a series of unobtrusive wooden boxes about three or four feet high, sit in the eastern side of the Food Forest, hardly noticeable to the average visitor. Within the hive is a complex society in which each bee serves a specific role: worker bees that collect the pollen; drones, who mate with the queen; eggs; and, of course, the queen. “They’re so sophisticated,” marvels T.J. “They just have their own world.”

The beekeeper starts the hive inspection by using a smoker to drive the bees away. The smoke interrupts the bees’ smell-based communication system, which would otherwise lead them to release alarm pheromones when they sense an intruder. Inside the hive, vertically arranged frames are thick with honey and the worker bees making it. Below that, in the “brood chamber,” the queen mates and lays eggs.

“There’s a tactile and sensory experience of being in a hive, feeling it buzz, feeling how warm it is, seeing how much changes on a daily basis,” Leda says. “It’s very humbling.”

“The pace of nature is completely different from our 24/7 culture, which does make it fascinating, because you have to be very thoughtful about what you choose to do,” says Bob. “I’ve been doing this for 10 years, and I’ve only really gotten to try 10 things because I have to wait a whole year to see if something worked.”

There are, of course, so many variables — most out of a beekeeper’s control. A rainy, 40-degree winter can mean more bee activity than a frigid one, so the bees will need a large store of food to keep them fed as they burn calories. And that means the beekeeper must be more conservative, leaving more honey for the bees than they take for humans.

The size of honey harvests can vary drastically from year to year. “Like any farming or agriculture, you plan, and nature laughs,” says Bob.

Come spring, the bees begin collecting nectar and, in turn, pollinating plants far and wide. Bees will go up to five miles to collect nectar, but in this lush area, Bob suspects they need rarely go more than a mile. “In the spring, all of the flowers are competing for the attention of pollinators. How they win that battle is by being the sweetest. So you can end up with some really sweet stuff.”

A few times a year, Urban Bee harvests from each hive, jarring and labeling each one-pound or five-ounce jar with its location, whether it be “Ali’s Yard, Fremont Canal” or “Alleycat Acres, Central District.”

Bob and I try honey from four of Urban Bee’s locations, and not only does the honey look different — one hue evoking summer wheat, another a deep amber — but they taste different. Bees collecting nectar from knotweed and buckwheat create honey deep in color and flavor, with a molasses or burnt sugar taste. Lighter honey is often the product of springtime blossoms like maple or berries. 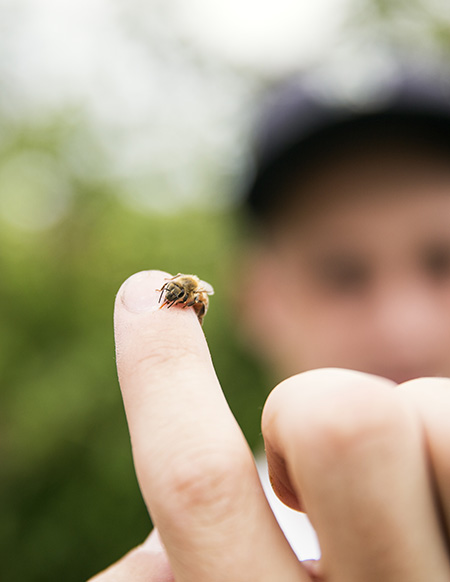 Urban Bee’s customers embrace this seasonality, signing up for a CSA where, for $15 a month, they get a one-pound jar of honey, each one different from the last.

“Our vision is to get small — to get as small as possible,” says Bob, who, since the beginning, has made deliveries by bicycle whenever possible. Today, there are even more Beecyclists, including a family in West Seattle who’s delivering West Seattle honey to their neighbors.

In addition to Urban Bee Company, Bob founded and runs the nonprofit The Common Acre, whose aim is to connect earth culture with human culture. “We do pollinator restoration and cultural restoration for humans,” says Bob of the organization, which runs the Flight Path project at the airport.

The Flight Path project, started in 2014, is a multi-faceted program that rebuilds pollinator habitat, uses honeybees as a conversation piece, and connects people through an art exhibit in the airport.  While the airport sees about a thousand take-offs and landings per day, Bob asserts that this is nothing compared to a beehive with its 15,000 foragers doing around a dozen take-offs each per day each.

“People aren’t going to respond to a spreadsheet or a threat that says, ‘Eat your broccoli,’ or, ‘Plant these things, or else,” Bob says. “They want to be inspired, they want to meet people in the community, they want to hear stories of how they can do it.”

Nicole Capozziello grew up in her family’s Italian restaurant in Wisconsin. She is a freelance writer and a tour guide at Theo Chocolate. 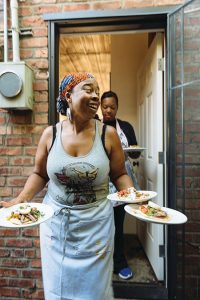