STORY AND PHOTOS BY PAOLA THOMAS

It’s a late summer afternoon on San Juan Island, and the sun’s rays reach down through the branches of Rich Anderson’s sleepy cider apple orchard, casting dappled shadows between the rows of trees.

The sun gilds the cheeks of 15 old English and French cider apple varietals of every hue — from rich purple, through Snow White red, to blush pink and spring green — and the scent of warm apple fills the air. In the distance, white yachts are bobbing on the cobalt waters of Garrison Bay, just around the corner from the Roche Harbor resort, though the timeless orchard setting is about as far from the hustle and glamour of a yacht marina as can be imagined.

It’s no wonder that this idyllic corner of the island became Suzy and Hawk Pingree’s favorite spot to take a walk after they retired to the San Juans. What is more surprising is that these two former professors ended up buying into Anderson’s Westcott Bay cidery, creating the San Juan Island Distillery, and devoting their golden years to the production of world-class ciders, award-winning apple brandy, and unique gins laced with island-foraged botanicals.

Suzy and Hawk met while earning their Ph.D.s at Stanford, and both became professors of media and communication at the University of Wisconsin The Pingrees lived most of their lives in the state, raising three children along the way. Suzy had, however, vacationed on San Juan Island as a child and, later, as a couple, they kept a vacation house there.

The Pingrees retired to the island in 2006 and at first busied themselves building a new home from scratch, but when that project was completed, they needed something else to channel their considerable energies into. They had always been passionate about farming, agriculture, and the cycles of the seasons — Suzy had worked with Wisconsin’s cheese industry — so starting a food-based business seemed like the logical next step. But it was only after placing the winning bid on a cocktail party at a fundraiser in 2008 and throwing herself into cocktail creation that Suzy realized she had found her passion. “We became deeply interested in alcohol,” she says with a wry smile.

A fascination with Washington’s apple industry led them to wonder why no one in the state was making a Calvados-style apple brandy, and they decided to make their own, buying into Anderson’s cidery in August 2010.

The maritime climate of San Juan Island is similar to that of the Calvados region of Normandy, France, and Anderson had replanted his family’s old 1.5-acre orchard — approximately 1,300 trees — between 1996 and 2001, sourcing and importing ancient varieties of cider apples from England and France, with lyrical names like Kingston Black, Yarlington Mill, Dabinett, and Sweet Coppin, back in the days before the internet made such things easy. Anderson started making cider in 1999, and by 2003, was winning the first of a string of national awards.

The different flavor profiles offered by each varietal allow him to create balanced blends and ensure that he has no flavor gaps during a varietal’s off years. Hawk worked with Anderson to learn the finer points of cider-making, and they now produce three ciders under the Westcott Bay Cider brand: Traditional Very Dry, a bone-dry European-style cider; Traditional Dry, a fuller bodied, more aromatic cider; and Traditional Semi-Dry, which, while still crisp, has more sweet apple flavor. “We may be small,” says Hawk, “but we are far from amateurs. This is world-class cider.”

At the same time, the Pingrees started work on the apple brandy project. They sourced their beautiful hand-hammered copper Adolf Adrian pot still from Germany and started distilling their cider into eau-de-vie — a clear, colorless fruit brandy. Hawk took classes, spoke to consultants, and read everything he could about distilling, but ultimately, he learned his craft by doing, constantly tasting, and adjusting to get the result he wanted.

Though every apple-based spirit they produce contains cider from their orchard, the Pingrees discovered that they also needed juice from “eating apples” to produce the best apple brandy. So they sourced eating apples from Tieton Cider Works in Yakima, which the Pingrees truck back across the mountains and Sound in a U-Haul about four times a year.

By Memorial Day 2011, the Pingrees were satisfied with their eau-de-vie, which they then set to age in used Limousin white-oak wine barrels. Apple brandy takes 3–5 years to age, so in the interim, Suzy started experimenting with using the eau-de-vie to make gin, in partnership with Kari Koski, her friend and “gin botanist” who crafts herbal tonics and bitters on the island and is an expert in the island’s varied herbs and plants.

Suzy, a creative cook who is loath to follow a recipe, threw herself into finding the right flavors. “This is cooking.” she says. “Really fun cooking.”

The Pingrees wanted to create gins that express the essence of San Juan Island. Inspired by the local orcas, which are so emblematic of the surrounding waters, they created the Spy Hop brand and imagery, named after the classic orca move of poking its head above the water and looking around.

The Spy Hop Harvest Select gin uses more than a dozen botanicals, most of which are locally foraged. Certain ingredients, such as juniper (without which the spirit would not be gin), citrus fruits, and star anise are brought in. But other botanicals, such as nettles, wild roses, blackberries, orris root, and Douglas fir tips are found on the island, and lavender is brought in from local farm Pelindaba. After learning that First Nation people made madrone tea, Suzy incorporated madrone bark into the gin to smooth out the other flavors. Suzy and Hawk forage all the botanicals themselves and freeze them until they can be distilled.

Nowadays, the Pingrees make 13 different gins, including seasonal varieties and their Seaside gin, full of seaside botanicals such as sea beans and a Salish juniper, which, although it contains no salt, still retains an elusive taste of the sea.

They also produce fruit liqueurs, fruit brandies, and cocktail bases. The Harvest Select gins are made using apple-based alcohol, while the distilled gins are made with a grain-based eau-de-vie. The first two distillations of the apple cider, with the most apple flavor, form the basis of the apple brandy, and the third and fourth runs go into the gin. The aged apple brandy, which finally came on line in 2014, is rich, complex, and exceptionally smooth, without the bite of some Calvados. It has won gold and best-in-class from the American Craft Spirits Association, making it officially the best craft-distilled apple brandy in the United States.

This micro-batch approach allows the Pingrees to experiment, play with flavors, and maximize quality, creating the beverages that they themselves want to drink. “If we don’t like it, we don’t make it.”

In 2012, they introduced a pommeau — a cider fortified with their apple brandy — to the Westcott Bay line-up, which they also use to rinse and condition the barrels in which the apple brandy ages, a technique learned on a research trip to Normandy.

Suzy has also created a San Juan Island vermouth, based on Madeleine Angevine grape wine from the San Juan Vineyards the island winery and infused with local botanicals. Her next project will be a “grandmother gin,” based on the French concept of “cuisine grand-mère” or “grandmother cooking” and using botanicals like thistles and Queen Anne’s lace.

Though some of their spirits are available in select outlets in the Puget Sound area, if you want to sample the full range, attend one of the Saturday tastings at their tiny distillery in this idyllic corner of San Juan Island.

The Pingrees’ philosophy is simple. “We want to say small, make it right, and not put anything on the shelf that isn’t wonderful,” Hawk says.

And, at an age when other couples might be putting their feet up, Suzy and Hawk prefer the constant innovation of running their business.

A food photographer who can write, Paola is never happier than when she is baking, photographing or eating cake. Find more of her work at paolathomas.com. 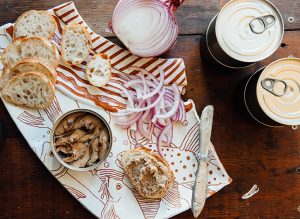 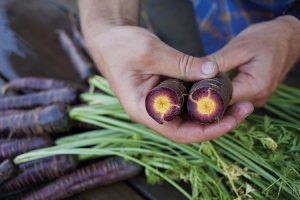 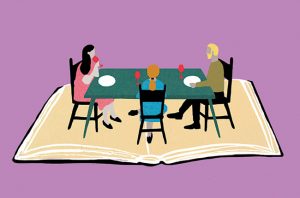 Eating Between the Pages