STORY BY MEGAN HILL
PHOTOS BY ZORN B. TAYLOR 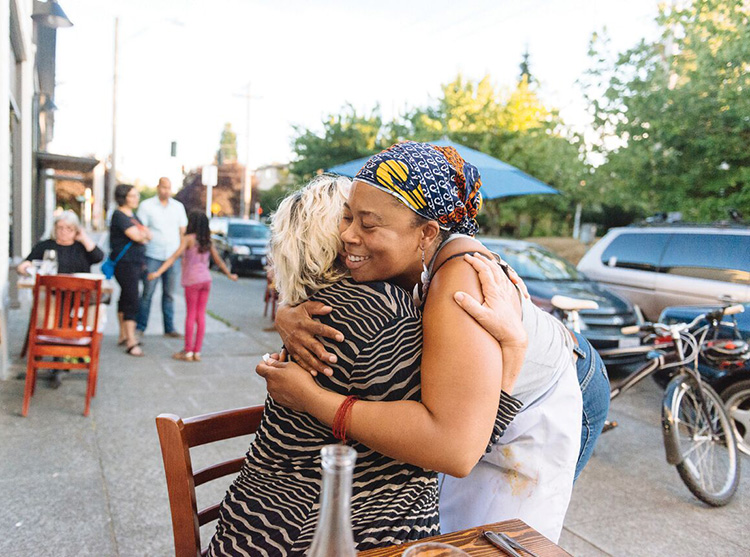 So many people started asking Kristi Brown about her hummus that she began counting.

The year was 2012, and Kristi had shut down her catering business to concentrate on some personal matters. Her mother had passed away, her children were finishing high school, and she was pregnant —  cooking had to take a back seat. “It was a tornado of different things, and I realized I needed a break,” she says.

But dozens of people were asking about the hummus. “People kept walking up to me at random times and in random places, saying, ‘Hey, you make that brown stuff that you eat with crackers.’”

They were referring to her black-eyed pea hummus, Kristi’s take on the traditional chickpea-and-tahini spread most people are familiar with. She adds a blend of spices and mild pepper sauce, and she has a spicier version enlivened with the Ethiopian blend of spices called berbere.

Thanks to her catering events, where Kristi served the hummus alongside a dozen dips, chicken skewers, bacon-wrapped asparagus, kale Caesar salad, and deviled eggs, she had unexpectedly developed quite a fan base. “Somehow, the hummus stood out,” she says.

Kristi moved to Seattle from Kansas City, in 1985, and attended Seattle Central’s Culinary Arts program. She had wanted to be a chef since she was 13 years old. Eventually, she landed at the iconic Kingfish Café on Capitol Hill, which specialized in creative approaches to traditional Southern dishes, before closing in 2015.

In the black- and woman-owned Kingfish kitchen — both a rarity for a prominent Seattle restaurant on its way to becoming an institution — Kristi found mentorship and encouragement from people who understood the barriers that minorities face in the culinary industry.

“There are a lot of black chefs that feel like they need to do some different kind of food than the food we grew up with,” Kristi says. “That there’s some kind of shame in doing soul food, or Southern food, and feeling like if you did that, people wouldn’t respect it in the same way that they would if you made something French-inspired, or something that sounded more exotic than what we grew up with. And that was the joy of Kingfish. It gave us an opportunity to showcase our food in a different way.”

Head chef Tracey MacRae encouraged her team to be creative, and Kristi’s black-eyed pea hummus was the result. “It was just a side thought, and then it became the focus,” she says. It started as a sandwich spread, but Kristi found it was good enough to stand on its own.

“It really birthed out of this idea to want to share with people the food I grew up on — and in a new light,” she says. “I think it’s such a beautiful way to explore different cuisines, and for food to bring people from diverse cultures together.”

Kristi originally founded That Brown Girl Catering in 1996, which she shut down in 2009. By 2012, though, the clamoring for her hummus was too loud to ignore. That Brown Girl Cooks! added catering back into her repertoire, as well as cooking classes, pop-ups, and other events. Her son, Damon Bomar, works with her — his official title is “Lead Go-Getter.” He’s been involved almost since the start, when he was a college student.

To get coveted shelf space, Kristi simply walked into various grocery stores, without so much as an appointment. At Central Co-op, for example, she asked to speak to the manager of the section that carries hummus. She’s constantly working at tasting events, handing out samples to get people to try the product. Today, Kristi goes through about a ton and a half of peas per year for her hummus.

Her favorite aspect of catering and tabling events to hand out samples is meeting new fans. There’s something about her unique approach to hummus that inspires storytelling. She met a woman at one event who told her of her childhood in Greece, making phyllo dough with her grandmother, who prohibited the kids from running through the kitchen because the dough was so ethereal that a breeze could break it.

“Just hearing those kinds of stories and having people say how much the hummus has inspired them to think about those things again, that’s a blessing,” Kristi says.

She may soon have another way to interface with her fans — in a brick-and-mortar restaurant of her very own. “It feels like a reward,” Kristi says. “It’s just that end dream. A lot of times caterers don’t get the notoriety that we deserve.” Whatever the final concept becomes, it will reflect the evolution of cooking into what she dubs “Seattle Soul,” a combination of her Kansas City roots, Southern influences, and Seattle’s international flavors.

Despite those diverse influences on its food scene, Seattle’s diners — like its overall populace — is overwhelmingly monochromatic. But food, Kristi says, is a way to bridge that gap.

“When you’re in a city where there are very few people that look like you, food is such a good opportunity to share so much richness of your past with other people,” she says.  And that feeling goes back to her customers’ willingness to connect, to share stories of their own heritage, over some simple black-eyed pea hummus. “The way people are touched by food, there’s nothing like it.”