It’s a classic scene in the Pacific Northwest: As the blazing days of summer wane into fall, salmon migrate from the sea, swimming up their natal streams to spawn, bringing vital nutrients to the watersheds where they were born.

But over the past 20 years, that scene has become an increasingly wan one. Fifteen species of salmon and steelhead trout have been declared endangered, with less than five percent across the Northwest returning to rivers and streams. As the region has grown, habitat loss, water pollution, and dam construction have contributed to shrinking salmon numbers.

While experts debate how to best tackle the issues contributing to the species’ decline, one certification program focuses on habitat restoration across the region’s swaths of private land — resource-intensive landscapes whose growing practices have significant impacts on the surrounding watersheds.

The Salmon-Safe certification program, started in Portland by co-founder and executive director Dan Kent, is a market-based incentive to inspire water quality protection and habitat conservation on private land by working with a diverse set of landowners, from private developers to farmers to wine grape growers. “The focus is on lower watersheds, agricultural streams, and urban watersheds that impact migrating salmon,” Dan says.

With habitat threats worsening, the nonprofit environmental group Stewardship Partners helped launch Salmon-Safe Puget Sound in Washington in 2004, increasing the certification’s footprint. Farms and vineyards that receive certification are awarded with an eco-label that not only spreads awareness but also allows consumers to take a powerful step toward supporting healthier watersheds.

The certification process is a rigorous one. Qualifying farms and vineyards in Oregon, Washington, or British Columbia must utilize a variety of holistic pest management solutions, such as introducing beneficial insects instead of relying on chemical pesticides.

Certification requirements are divided into seven categories that focus on water quantity and quality required for salmon habitat. Applicants are required to implement practices such as preserving or providing shade and cover habitat on shorelines for salmon to rest and breed in, and reducing the use of excess water to increase in-stream flows — both of which help keep water cold and deep enough for salmon to migrate and spawn.

They are also required to implement systems that filter run-off and minimize contaminants like pesticides and animal effluents. Activities like overgrazing or plowing and excessive irrigation cause land erosion, transporting chemicals and sediment into streams. Not only do the toxins build up in salmon and accumulate up the food chain, but the sediments can smother fish and their eggs.

The “whole-farm” certification means that everything growing on the land 1) is managed sustainably by meeting general standards and 2) contributes to restoration efforts in six management categories. Participants must provide an inventory map, pest management records, irrigation information, documentation of annual water usage, habitat restoration plans and documentation, and documentation of waste-management practices. From there, Salmon-Safe partners with an independent expert in the field — such as LIVE (Low Input Viticulture & Enology Inc.) or Tilth Alliance — to work with landowners through the certification process. Once certification is obtained, it lasts for three years.

Since launching, the program has made notable progress across the region, specifically in the wine industry. As of 2019, Salmon-Safe has certified 350 vineyards across the Willamette Valley, Columbia Basin, and up into Okanogan and British Columbia.

“We’ve seen the wine industry and vineyard growers leading the way in all of agriculture in the Pacific Northwest,” Dan says. “More than any sect, they’re receptive to the idea of farming practices that reduce downstream impact. Because of the nexus of farms and vineyards built on rivers in the Puget Sound, the work to not only protect but restore the salmon habitat is crucial.”

Leading the charge as the first vineyard to be certified Salmon-Safe in Washington is Tom Alberg and Judi Beck’s Stillwater Creek Vineyard in the Columbia Valley. Tom and Judi developed 200 acres of Stillwater Creek into a vineyard in 2000 and, in 2007, worked with Stewardship Partners to get the land certified as Salmon-Safe. “My wife and I are strong supporters of protecting the environment,” Tom says.

Certification means the vineyard pays meticulous attention to everything from pruning to canopy management to water conservation. Like farms, vineyards use pest management techniques that increase beneficial insect populations rather than indiscriminately spraying chemical pesticides — among other methods. “It’s something farmers should be doing anyway,” Tom says. “We don’t need to turn all land into native forests — it can be positive to have commercial developments and use the land productively, but without damaging the environment.”

Tom explains that two-thirds of Stillwater Creek grapes go to state wineries and one-third goes to the Alberg family winery, Novelty Hill, in Woodinville. The Woodinville winery shares a space with Januik winery with both labels under the direction of winemakers Mike and Andrew Januik. After Stillwater Creek was certified, the two families partnered to create the Spring Run rosé — a co-branded label made with fruit from Stillwater Creek. Two dollars from every bottle sold supports Salmon-Safe.

“On top of not causing harm, we really wanted to improve the salmon habitats, and that was the reason for starting the Spring Run rosé,” says Novelty Hill and Januik’s winemaker Andrew Januik. The Rhône blend rosé is a mixture of Grenache, Syrah, and Mourvedre, and Andrew describes the notes as bright strawberry with just a hint of sweetness. “We usually release it in May, and it’s gone right away. I’d say it’s the most anticipated wine that we release every year — kind of a sign that summer is around the corner.” Since the program began [in what year], the winery has donated more than $60,000 to Salmon-Safe.

“Tom is a leader in this space,” says David Burger, Stewardship Partners executive director. “He showed how the Salmon-Safe label could support farmers, vineyard owners, wineries.” Now, with wine shops, supermarkets, and restaurants all wanting to provide evidence of sustainability, other sectors like hops growers are taking note and following suit. In the past five years, 33 percent of Oregon’s hops acreage and 20 percent of Yakima’s have become Salmon-Safe certified.

Still, even with the growth of the program, there remains a sizable amount of work to be done to save the salmon and clean up watersheds across the state. “Salmon are the indicator species,” David explains. “They’re the canary in the coal mine for Puget Sound rivers. The health of the watershed is based on how many salmon are returning and utilizing the habitat.”

Key milestones like removing the Elwha River dam have been instrumental feats, but it’s not enough, David says. Systems such as the Snake River are home to spring and summer Chinook — two populations that have been declining since 2016 and are now categorized by the Endangered Species Act as “Not Making Progress,” trending towards “Getting Worse.”

“A lot of the habitat has been lost,” David says. “We all play a part in making sure we protect what’s there and don’t contribute to the problem. You can sip for salmon, but you can also create habitat. Puget Sound is probably the most important estuary in the continental United States, and it’s one that we still have a chance to save.” 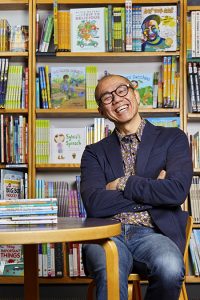