Conscious Eatery, Seattle’s philanthropic sandwich shop, started with a simple idea: give a meal for every meal sold.

Hanging on the back wall of a small Georgetown sandwich shop — tucked off the main drag amid drab office buildings — are two big chalkboards. One lists the local companies the restaurant uses for its ingredients; the other is what makes this restaurant special.

For every meal Conscious Eatery sells, it gives one away to a local nonprofit that serves the homeless community. According to the chalkboard, they’ve given more than 12,000 meals away since they opened two years ago. But founder Cierra Laub says that the number has risen to more than 17,000.

Cierra and her co-founder and fiancé Chaz Rowlan have long been passionate about restaurants and nonprofit work. Long before they embarked on opening Conscious Eatery, the two volunteered for nonprofit organizations while they worked various restaurant jobs. They would run into each other while raising money for the same cause or working for the same restaurant. It wasn’t until 2015 when they learned that Seattle Mayor Ed Murray declared homelessness a state of emergency, that they began to conceive the idea for Conscious Eatery.

“My father, my brother who works here, and my sister were all homeless during my parents’ divorce,” Cierra says, “so it’s very close to home for all of us.” Chaz’s parents and brother also experienced homelessness for a few months before he was born.

Homelessness is not an unfamiliar crisis to Seattleites. In 2015, the annual Point-in-Time one-night count — which estimates the number of homeless in King County — reported 3,772 people living without shelter. The City of Seattle declared a state of emergency in response, but the number continued to grow. In 2018, the number of people living unsheltered was 6,320.

Chaz and Cierra knew they had to act. Chaz was working as a restaurant manager and Cierra was a restaurant consultant when their ideas began to take shape. In 2016], after five months of planning, Chaz and Cierra opened Conscious Eatery as a catering company, with the intention of expanding into a food truck. But just a few months in, the building that housed their commissary kitchen was sold, forcing them to close or relocate.

It just so happened that a sandwich shop in the Georgetown neighborhood was giving up its lease. Chaz and Cierra decided to make the leap — a turnkey restaurant would be cheaper than acquiring a food truck — and, in 2016, they emptied their bank accounts to put the first and last months’ rent down.

Whenever a Conscious Eatery customer orders a sandwich or salad, they’re asked if they’d like to “make it a meal” by adding two sides, such as potato salad or chips. Conscious Eatery then keeps a tally of every meal sold for their nonprofit partner.

When the quarter ends, Chaz and Cierra arrange a meal drop with the nonprofit. Using the same locally-sourced ingredients they serve to their restaurant customers, Chaz and Cierra put together an array of sandwiches and salads. They take the meals to the organization and either hand them out themselves or bring a team to distribute the meals at a function or event. The nonprofits can also opt to receive meals when it’s convenient, rather than all at once.

“A full meal is just so comforting,” says Cierra. “It can put a smile on someone’s face.”

Their model resonates with their customers, many of whom are regulars that stop in almost every day. Some even come twice a day — once for breakfast and again at lunch, opting for classics like a BLT or a gourmet option like Garden + Goat, made with sour rye, Mama Lil’s peppers, goat cheese, lemon aioli, golden Dijon, arugula, and bell peppers. Even Charlie, of Charlie’s Produce, picks up lunch for his office.

The concept has inspired other acts of generosity. Chaz, who built the restaurant’s tables from reclaimed wood found through Craigslist, said the man who made the posting refused to take payment after hearing about the business. Their landlords lowered the rent when they found out about the cafe’s mission.

Chaz and Cierra aren’t stopping at just one restaurant; they hint at opening at least two more locations in the near future and hope their model can be adopted in other cities. One of their hopes is to start Conscious Concepts, a nonprofit that addresses homelessness from multiple angles, such as job training and housing.

Their current model is evolving, too. Chaz and Cierra have worked for the better part of a year, with Facing Homelessness, an organization dedicated to humanizing homelessness. The organization is working on “The Block Project,” which invites the community into the task of ending homelessness by building small homes in residential backyards for those living unsheltered. Conscious Eatery is the official safe meeting spot for homeowners and their new tenants.

“There’s a lot of things in the world you can be known for,” says Chaz “It’d be really cool to be known for helping.” 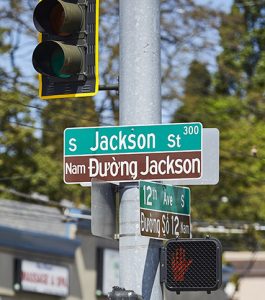 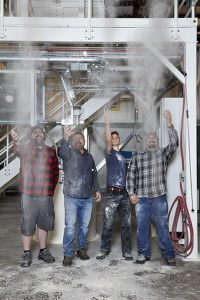