Edible Seattle / Explore / Explore / Farm to Table / The Secret of the Sizzle-Whump: Kate McDermott’s Art of the Pie

The Secret of the Sizzle-Whump: Kate McDermott’s Art of the Pie 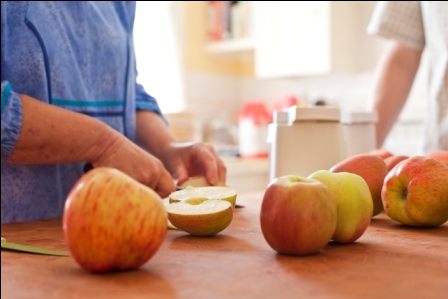 Kate McDermott greets us with a huge smile, and asks, “Are you ready to bake a pie?” Behind her, there is a crisp, golden dome, and the air in the kitchen smells of warm peaches and butter. I fight the urge to go rogue: grab the pie, head for the hills, eat the whole thing in blissful solitude. A small (but very stern) voice calls me back from this sticky and uncivilized dream with the reminder that I am here to learn from a master. It doesn’t hurt that the master has just handed me a “tasty”—scraps of pie crust rolled up with cinnamon sugar. It takes approximately two seconds to eat, but it does quell the greed momentarily.

None of the three students today are novices when it comes to pie, but we all have different ideas—different expectations—both what it means to eat it, and what it means to bake. Amy, a brilliant baker, has enough confidence in her skills that she’s known to try different crust recipes on a whim. Tom has made precisely the same shortening-based crust for a couple of decades; he doesn’t deviate from the recipe from Better Homes & Gardens. Lately, he’s decided that his pies are merely acceptable, rather than great, and is hoping for improvements. As a baker of pies, I am embarrassingly inconsistent. I don’t fear pie, but I’ve also baked some gruesome flops, the sort where everyone smiles politely and nobody asks for seconds. Perfect pie has become my quest, somewhere between the golden fleece and the Gorgon’s head.

Kate, along with her husband Jon Rowley, spent two and a half years perfecting the crust that Kate teaches in her “Art of the Pie” classes. Every quality a crust should have—flakiness, crispness, tenderness, rich flavor—is present. This crust is so great, it netted Kate four blue ribbons and a Best in Show for the four fruit pies she entered in the Clallam County Fair this past summer. Truth be told, I am skeptical that it can be duplicated.

I’m luckier than most skeptics in that I have a tremendously patient teacher. Kate shows us how she makes this magical crust, with chilled flour (King Arthur), a mix of cold butter (Kerrygold) and leaf lard (from a small farm in Pennsylvania), and a dash of salt (kosher, ground smaller with her fingers). She says she’s “not a real accurate measurer”, and doesn’t think it matters what tool is used to blend the fat into the flour—she prefers to just use fingers, but isn’t insistent about it. What she is insistent about: however it’s blended together she says it should be lifted up, not pressed down. The motion she uses is palms up, rubbing the mix in her fingers with a firm, light motion, causing little butter-flour showers to cascade into the mixing bowl like a fluffy, edible waterfall.

Amy and Tom get this technique instantly. I am the puzzled, fretful kid in the class who’s having trouble. Kate has to grab my hands and physically flip them over for me to get it right. It’s awkward, but I start to get it. It feels like saying hello to the ingredients, coaxing them into a partnership. It’s a simple, happy feeling—not so much a drama-filled quest as it is a stroll in a highly buttery park.

I ask a few questions—why Irish butter, why lard, how flexible does she feel about substitutes—and it leads to a conversation about our filling of the day: Gravenstein apples, from Merritt Orchards in Bow. She and Jon experimented with blending apples for pie for an additional two years, and Kate is familiar with the baking qualities of an endless stream of heirloom varieties. During fall and winter, her apple pies can have a mix of up to 18 different apples, chosen for flavor, texture and precise sugar content as measured by a refractometer. She doesn’t peel the apples for filling—her apples are collected from orchards around Western Washington—but qualifies that by saying “grocery store varieties are developed in part because they ship well. Their skins are tough. If you use them, peel them.” She firmly dismisses grocery store lard: “If that’s all you can find, just use butter.” She also mentions that she’s talking to some regional flour companies, in hopes that she’ll ultimately find a perfectly milled Washington-grown flour.

Working quickly as we blend in the ice water, she has us divide our dough into two small balls, indenting each ball gently into a disk with a slight depression in its center. They’re tucked into the fridge to rest and chill for a few minutes while we clean the counter and stir up the filling.

A big crate appears, loaded with about five pounds of apples per pie. A slice is chopped off for a Brix reading on the refractometer. This is a quick, highly precise test to determine the percentage of sucrose in water; a high Brix reading corresponds to how sweet we perceive fruits to taste (peak-season sweet cherries will score in the low 20s). Our Gravensteins rate an 11, lower than the 12-13 that will be seen later in the season. My mouth is perfectly happy with the not-too-tart 11, but the refractometer is a cool gadget, and it’s obvious that testing the exact sugar in the apples means we can correctly tweak the recipe proportions to accommodate sweet or tart fruit. Thanks to Kate’s vintage Ron Popeil Veg-o-matics, the slicing takes just a few minutes. A quick tidy-up and we’re ready for rolling.

Kate likes long French rolling pins for the control they offer, but also gently pats a small red-handled pin, one that her son used when he was young. Using a French pin, Amy rolls her dough out into a perfect circle almost before I’ve unwrapped my disk. The dough is fairly soft, and Kate is, according to Tom, “cavalier about flour.” She coats a pastry cloth generously with loose flour, and sprinkles more on top. I proceed to roll out my crust exactly opposite from the method Kate demonstrated, applying uneven pressure, repeatedly flattening the same section while entirely missing other sections. It’s pretty sad and raggedy. Kate helps salvage, all the while promising me it’s fine, it’ll be beautiful, and showing me (yet again) how to make sure the pressure’s even and in the right places.

Excess flour is brushed off with a budget paintbrush from the hardware store (she says, “they’re the exact same thing as pastry brushes, but a lot cheaper.”), and Tom expresses both approval and interest as he sees that very little of the cavalierly-applied flour was absorbed by the dough.

We get the crusts into our pie pans, and Kate shows us various options for crimping edges (Amy’s is perfect) and decorating the top, making sure to include sizeable cuts to let steam escape during baking. I choose the simple solution, which involves mashing the crust with the tines of a fork like a peanut butter cookie. Compared to Amy’s and Tom’s pies at this juncture, mine is Miss Congeniality. (Kate is utterly confident it’ll turn out just fine.) Each pie gets a light coating of water/egg white wash, and a heavy sprinkle of sugar. Amy asks why eggs rather than milk for a wash, and Kate’s reply, with a tiny laugh: “I like egg.” There is an implication that Amy is free to use egg, or brush with milk, or neither. Kate’s ideas of pie are pretty flexible—or the wash isn’t an especially crucial detail.

The pies go into the oven at a high temperature, and a timer is set for a few minutes, when we’ll lower the temperature to finish baking. She mentions that Jon baked a pie where he reversed these settings, starting at a low temp and finishing high. It turned out beautifully—which according to standard cookbook wisdom, shouldn’t have happened. (In other words: So much for the experts and their so-called wisdom.)

We adjourn to the dining room, where we arrive at the part of class in which I excel. Kate baked a Frog Hollow peach pie for us to eat while she reads a pie-themed sermon from Henry Ward Beecher. The specific detail in this sermon is remarkable, and like all of the Rev. Beecher’s written work, skillful and engaging. Conversation veers from knowledge to the emotional side of baking. Kate—getting slightly, sweetly teary-eyed at one point as we talk about dedicating pies to particular individuals—believes that, “Intent matters. Love is an important ingredient, it really is.”

I eat two pieces of pie while we chat. Velvety, sweet filling and a perfectly flaky top and bottom crust. I take a few minutes to marvel at it, as this pie is quite literally marvelous. My brain is swirling with the startling names of apple varieties (Winter Banana? Horneburger Pancake?), with historical facts, with vague ideas about how confidence and emotion can be transferred to inanimate ingredients. As the scent of the baking pies fills the room, I approach sensory delirium.

After about 45 minutes, we troop back into the kitchen to listen to our pies. Kate says that when pies are truly baked, they make a distinctive “sizzle-whump” sound. At this point, we all hear “sizzle” but no real “whump.” They return to the oven for another 10 minutes. The second time we listen again, and sure enough—there’s a solid bass “whump” that sounds like the filling is at a gentle boil.

They’re all beautiful. Amy’s (no surprise here) is Martha Stewart gorgeous, with a perfectly rippled edge. Tom’s has a goofy droop along one section, a bit like a Dali painting, if Dali had painted flaky golden-brown pies. And Kate was right: even Miss Congeniality looks delectable. We are beaming.

Art of the Pie classes are approximately 4 hours long, and each student goes home with a fresh-baked pie. $125 includes all ingredients, recipes and handouts. Class size is limited to three students, and the spots fill up well in advance.
www.artofthepie.com

Jill Lightner is the editor of Edible Seattle and writes the food blog www.locallygrowngirl.com. Pie is her favorite breakfast. 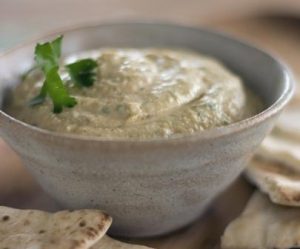