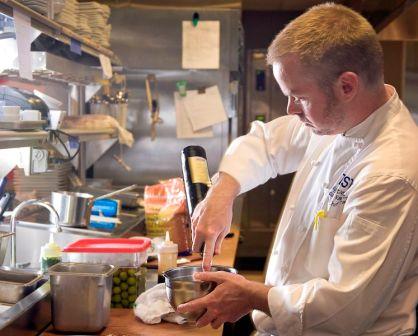 It’s not often that you walk in to a sustainably-driven restaurant kitchen and find a handful of chefs and staff prepping for a hot dog tasting—a “dirty dog” tasting, to be exact. But then, these are no ordinary hot dogs. On the ballot are local frankfurters from Pike Place Market stalwart Bavarian Meats, two different sausage links from Skagit River Ranch and a tofu Smart Dog.

Other things that are immediately noticeable in the big commercial kitchen include the compost pails (each stacked high with greens and food waste) that are wedged into the tops of each rectangular garbage can, and the easy and open candor of the entire kitchen crew. I am surrounded by people who clearly know each other well.

Nearly the entire kitchen staff at Taste Restaurant has been working there since day one, Chef Craig Hetherington chief among them. The camaraderie is recognizable from the way everyone talks over each other, like at a big family dinner, and everyone shares the same tasting plate. Day staff sweeps the floors, a floor manager and the pastry chef (up-and-coming superstar Lucy Damkoehler) debate about hot dog “snap,” and all the while Craig chats, smiles and answers questions.
“I’ll go back and cut cheesecloth,” Craig teases, as yet another person answers his questions for him, but it’s obvious he’s in command as line cooks sweep by holding out food for him to taste and examine for plating suggestions. A green apple granita needs more freezing; he suggests setting a small bowl on a big full mint leaf, as a pretty plate liner. “It’s our amuse bouche,” he explains—a small taste to start the meal for each guest that night.
His focus is on sourcing local food and supporting a local food economy. “As soon as I had control (in the kitchen) I started to pay attention,” he says, noting that when he became chef, it all started coming together—business, food and ethics. “I am not really an activist, but I want to understand how and why people are getting paid.”
Those people are the farmers and producers that Taste supports on their locally-weighted menu. His kitchen purchased 89% of their food locally last year, and it all comes back to Craig’s strong belief in doing the right thing.

An avid cyclist, Hetherington moved to Seattle (after an 8-year career in competitive road racing and a stint owning a bike shop in Port Townsend) and completed his culinary studies in 1999. He worked in only three other kitchens before finding a home at Taste. “I needed a new direction, and wanted to get more involved,” he explains, as a tray of buns are pulled from the ovens just behind our perch in the middle of the kitchen. Those buns are from Columbia City Bakery, yet another highly respected local food producer.
Craig directly sources food from over 50 farm-to-fork vendors—no small number considering that he oversees menus and sourcing not only for the restaurant kitchen, but the catering production for Seattle Art Museum and the Olympic Sculpture Park. The kitchen at Taste is where Craig “opened his eyes,” and where he continues to vote with his dollars. When he spends money, he likes to “have it go in the right place for the right reasons.”
Recently, he purchased an entire boat of fresh-caught Bristol Bay King Salmon. He spent a summer in Alaska on the fishing boats a few years ago and witnessed some fishermen being paid as little as nine cents per pound for their catch. He rights this wrong by offering a fair market price to the local producers he supports. Sure, it’s ultimately pricier, but he’s banking on it being tastier, too.
While Craig spends most days in meetings and overseeing the busy kitchen, he does still find time to get his hands dirty by either expediting or participating in out-of-restaurant events with other chefs. When I was following him around the kitchen, he was gearing up for a hamburger cook off at Skagit River Ranch, an organic farm raising 100% grass-fed beef, field-raised pork and pastured chickens.
With nothing but ego and reputation on the line, Craig is playing it cool with his recipe development. “What’s the secret to a good burger,” I asked as he politely walked me out. “Don’t know yet,” and he shrugged casually. “It’s got to be red, it’s got to be dark, and it’s got to be flavorful,” he offered, then turned on his heels to get back to work.
TASTE Restaurant
Seattle Art Museum
1300 1st Avenue
Seattle, WA 98101
reservations:  206-903-5291

TASTE Café
Seattle Asian Art Museum
1400 East Prospect Street
Seattle, WA 98101
206-654-1382
Amy Pennington prefers hamburgers over hot dogs, hands down. To see what else she has on her plate, check out her gardening and cooking website, amy-pennington.com/go-go-green-garden. 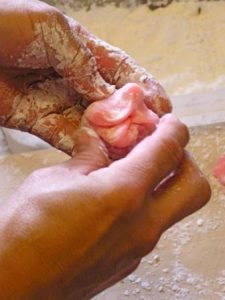 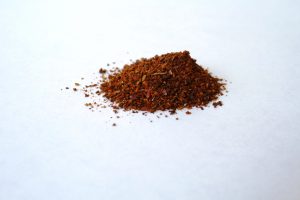 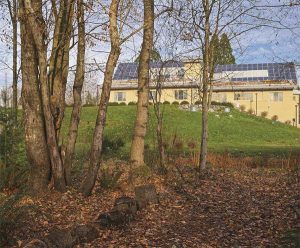