The Japanese Confections of Chika Tokara 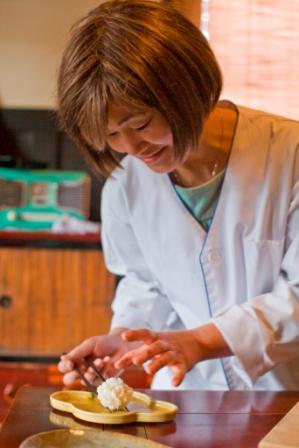 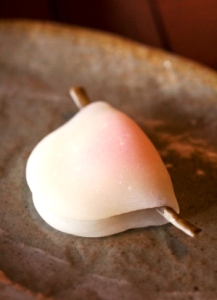 [twocolumns]Number 6208 is a modest white storefront tucked way back on Phinney Avenue. The gate at the sidewalk is draped with fluttering noren, the rectangular entry banners that signal when a Japanese shop is open. The front yard is a large rock garden, with a little maple tree and a wooden rake. The stillness of this place suits what is hidden inside: The rare Japanese confectionary outside of Japan.Passers-by intrigued by the large sign on the street—Tokara, Japanese Confectionary—will be disappointed if they walk inside this year-old establishment expecting to sample something on the spot. Tokara’s traditional Kyoto-style wagashi must be ordered in advance. These labor-intensive confections cannot be refrigerated and are too delicate to languish on trays. The curious who want a taste can order prior to touryanse, the open house that occurs on the 10th of every month. During this time, a box of three different sweets can be picked up for $10.

Proprietor and confectioner Chika Tokara was a 20-something editor in Japan 16 years ago when she enrolled in a neighborhood wagashi seminar on a lark. It was unusual for such a class to be offered, even more unusual for a young Japanese woman like herself to be interested. “Most young people in Japan like Western sweets, like chocolate,” Chika says.

After her husband was transferred to Seattle, she continued to create wagashi, for the simple reason it made her happy. “If I am depressed, my husband says, ‘go make sweets.'” As she honed her skills, she began providing these old-fashioned confections to private clients, including the Seattle Urasenke Foundation, which promotes chado, the Japanese way of tea, through ceremonies and classes.

I taste my first piece of her wagashi, with a cup of green tea, sitting on a tatami mat in her shop. The astringent smokiness of the tea is more satisfying after a small nibble of the treat she offers, on a ceramic plate with a bamboo pick. This lovely sweet has two parts, a small ball of an (sweetened adzuki bean paste) wrapped with a pink and rose ribbon of shiro an (sweetened white bean paste). In texture, appearance, and sweetness, the closest Western cousin is marzipan.

Wagashi is a catch-all term for traditional Japanese sweets made with various combinations of rice flour and sweetened beans. But this description is as overly simplistic as describing all the goods in an American bakery as a combination of wheat flour and dairy. Walk into any large wagashi shop like Tokyo’s Toraya, and you’ll find a vast array, from quivering jellies and sponge cakes to mochi and frozen ices.

The easiest way to understand the complicated variety of wagashi is by level of formality. Most Westerners are familiar with mochi, a component of many types of wagashi. The ubiquitous daifuku, for example, is a soft, rubbery ball of mochi filled with an. It’s the type of treat—home-made or store-bought—you’d offer in your own home, along with a mug of tea-bag tea.

While daifuku could be considered the chocolate chip cookies of the wagashi world, manju would be more like chocolate cake. Like its close cousin daifuku, manju is a round white ball filled with bean paste. The resemblance ends there. Because it is steamed, the exterior of manju isn’t rubbery but cake-like; its interior is creamy and soft. Manju is something you’d indulge in at a neighborhood tea shop, with a pot of properly brewed loose tea.

Though Tokara offers various types of manju, many of the confections here more closely resemble petit fours: beautifully made artistic creations that happen to be edible. Rooted in the ancient and fiercely protected sweet-making traditions of Kyoto (Japan’s cultural epicenter), these types of wagashi are most likely to be found at highly ritualized events, such as weddings, seasonal festivals, and tea ceremonies. If the situation calls for a woman to wear an obi, expect this kind of wagashi to be served, alongside the whisk-whipped, bitter green froth of traditional tea ceremonies.

This formal kind of wagashi is ruled foremost by aesthetics and therefore subject to seasonal interpretation, the most important rule guiding the free-form artistic world of wagashi-making. For Setsubun, on February 3, Tokara will feature several wagashi to celebrate the end of winter and the advent of spring.

One of the oldest known forms of wagashi, “Ancient Camellia” is a small mound of sticky rice with cinnamon adzuki paste, set in between two decorative leaf wrappers. “White Plum and Red Plum” are twin flowers of fluffy sponge cake flavored with Japanese yam. The vivid pink “Waiting Bud” is a soft, creamy layer of white bean paste petals enfolded around a heart of adzuki bean paste. “Masu” is a Japanese yam-flavored rice cake filled with bean paste. While “Spring Under Snow” may resemble a macaroon, it’s really a cluster of white bean paste threads filled with green-tea scented bean paste. The Fern, like the twin “Plums,” is sponge cake, but formed into a rounded square.

No matter what their names, it’s all exquisite stuff, which begs to be contemplated before being eaten. That seems to be the sweet lesson of wagashi: Take some time to appreciate what’s on your plate.[/twocolumns] 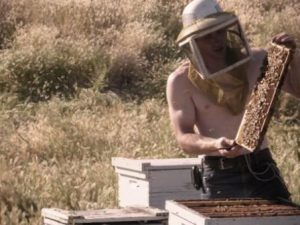 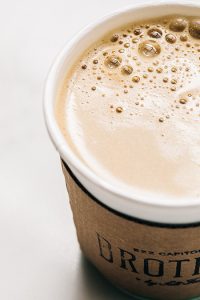