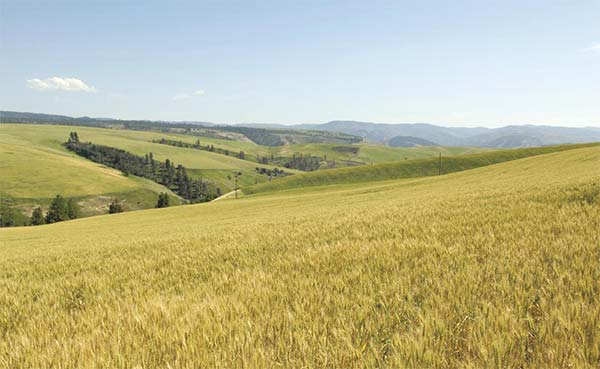 Karl Kupers’s twinkling blue eyes, easy grin, and tall lean stature might be expected on a Hollywood set but not in the wheat fields of eastern Washington. But there I was in Ritzville, Washington, with 50 others on the Shepherd’s Grain farm tour, listening to Karl’s rich, energizing voice resonate across the ever-so-gently-swaying golden fields.

Karl had been growing 4,400 acres of wheat “conventionally” for 23 years, and the operation had stopped making sense. By conventionally, I mean plowing his fields, planting wheat seed, applying fertilizer and herbicide, harvesting the fields, and then selling into the commodity markets and watching his wheat leave the country. He never met his customers, he didn’t know what his wheat was used for, and he never even saw it made into flour.

And Karl was not alone; he was among 99 percent of the wheat growers in this country. Ninety-nine percent of the wheat in the United States is grown for the commodity market, a virtual marketplace for buying, selling, and trading raw products worldwide. Less than 1 percent of the wheat is grown for direct sales to consumers. Sadly, 40 years of misguided food policies have resulted in this unintended, unsustainable force that was grinding away at Karl’s operation, constantly demanding more production for lower and lower cost. Bankers, not bakers, were deciding which wheat varieties he would grow.

Farmers joked that
Whitman County’s
No. 1 export was topsoil.

An aspect of conventional farming that was especially troubling to Karl was the plowing. Karl’s farm is in Harrington, Washington, part of a geographic region in eastern Washington called The Palouse. This unique area is characterized by undulating hills that rise and fall and fold in on themselves with a sensual rhythm. The hills are steep enough to be dramatic, but not so steep that they can’t be plowed. The steepness, sporadic rainfall, and gusty winds can easily sweep away soil that isn’t anchored in place with roots. Every time his tractor circled the field, Karl saw his precious topsoil swirling in the wind or being washed down the roadside gully. Farmers joked that Whitman County’s No. 1 export was topsoil. Not a good thing.

We need healthy soil to grow food. The World Bank reports that approximately 11 percent of the world’s total land area is considered arable agricultural land, and according to David Montgomery, author of Dirt: The Erosion of Civilizations, we are destroying 23 billion tons of good soil each year. At this rate, it will be gone in 150 years. One of the biggest contributors to losing soil is the simple process of plowing. Karl’s instinct was right on: Something was very wrong, and his farming operation was not making sense.

Karl and his colleague, Fred Fleming, started experimenting with notill or direct-seed, which is the practice of not plowing the field but rather slicing through the stubble and planting the seed about seven inches deep without exposing the soil. They realized that their no-till experiments were showing a decrease in soil erosion and, as the wheat stubble died and decayed, the soil’s organic matter was increasing, thereby resulting in a healthier soil.

In addition to their appreciation for not being cut up by plows, earthworms and other soil organisms thrived on the additional food in the no-till soil. Leaving the stubble on the surface also helped hold in moisture. With water availability a growing concern, keeping more moisture in the soil helps plants grow and keeps less water running off the fields. The runoff can carry sediment, fertilizers, and pesticides, which cause water pollution. Because Karl and Fred weren’t plowing, they were using less fuel and emitting less exhaust. Fred estimated that using the direct-seed method reduced diesel consumption on his farm by 38 to 42 percent. Karl, Fred, and the earthworms were happy. Karl also knew that the commodity markets would never cover the cost of a no-till approach. Opting out of the commodity wheat market, which really only cares about cost, is not for the timid. Karl knew he had to create a product that distinguished itself by quality not quantity, and he had to find a market that would pay what it actually cost to grow food with an ecological conscience and without any federal subsidies. He knew he had to find a mill that could grind his wheat and be flexible enough to blend the flours that customers wanted.

Karl and Fred went to Spokane to meet with Archer Daniels Midland Company (ADM), the largest agricultural processor in the world. Can’t you just picture Karl asking the largest grain processor in the world if they would process his few bushels of grain? Karl and Fred left the meeting with a “no” — but it wasn’t a “hell, no!” so they went back. At the next meeting, those twinkling blue eyes softened up ADM, which agreed to grind Karl and Fred’s flour. Now the two farmers needed buyers.

They hoped there would be customers who would pay what it cost to produce flour that was more sustainably grown. They had to differentiate their wheat from the commodity wheat and convince customers to try their flour. A Washington State University agronomist helped with identifying preferred wheat varieties for taste, USDA’s Western Wheat Quality Lab helped them mill and test small batches, and the culinary arts students at Spokane Community College experimented with different flour blends.

In 1996, with the help of a federal grant and WSU, Karl and Fred began making the complete transition to a no-till operation. The change from conventional to no-till was huge. New equipment had to be designed and built, as well as developing a new approach to weed and disease control. Cover crops had to be identified, so they started planting alternative crops like canola, millet, corn, and buckwheat on 40-acre plots to see if the model would conserve the soil and still be profitable.

Three years later, Karl Kupers and Fred Fleming said goodbye to the commodity rat race entirely and launched their Shepherd’s Grain brand. Today, 60 farmer-owners market their wheat through the Columbia Plateau Producers, a limited liability company that markets its products under the Shepherd’s Grain brand. Their flour is used from Bellingham to Portland and has earned a reputation among bakers in the Northwest for its top-quality flours. Blazing Bagels, Cupcake Royale, Haggen, and many others are using Shepherd’s Grain flours.

Wanting to ensure traceability, Columbia Plateau Producers has a unique feature that allows customers to trace the farmer who grew the wheat that was milled for their bag of flour. After buying Shepherd Grain’s flour, customers can go to their website, type in the batch or product number that’s on their bag, and see which farmer grew the wheat that made their flour. Patrons can “Adopt your own flour farmer” and even thank them online.

One of those farmers is Rob Dewald, a 4th-generation family farmer near Ritzville. Rob’s great-grandfather homesteaded there in 1889, and Rob’s grandfather was born in Rob’s living room in 1900. They farmed the land with mules into the late ‘40s and then switched to a diesel tractor. Rob’s father took over the farm in the early ‘60s and then Rob took over the farm in the mid ‘80s. Unhappy with the soil erosion, they started direct-seeding on 160 acres in 1995 and expanded a little every year until 2004 when they went 100 percent to no-till. They raise winter and spring wheat, barley, yellow and condiment mustard, and spring canola. Joining Shepherd’s Grain helped them transition their farming practices, access direct markets, and get on the path out of commodities.

If this sounds like a Cinderella story, too good to be true, what happened to the evil stepsister? Well, the evil stepsister is here, and her name is Weeds. Plowing’s essential purpose is to bury crop residue, manure, and weeds, while aerating and warming the soil. Plowing is a great way to kill weeds, so if you don’t plow, guess what happens to the weeds? They grow and grow and grow. Direct-seed farmers had to find a way to kill the relentless evil stepsister Weeds, or else the baby wheat seedlings would never have a chance. Karl and many of his farmers use glyphosate, a broad-leaf herbicide. On March 20, a scientific working group of 17 experts from 11 countries released their evaluation of the herbicide glyphosate for the World Health Organization’s International Agency for Research on Cancer (IARC). The group classified glyphosate as “probably carcinogenic to humans.” We want to thank the World Health Organization for their research and assessment.

Many European countries promptly pulled glyphosate off the shelf. In September, California’s Environmental Protection Agency Office of Environmental Health Hazard Assessment issued a “notice of intent” that it intends to list glyphosate as known to cause cancer. In anticipation, Karl has plans to transition to a less toxic herbicide and is considering using SUPRESS Herbicide EC, which has been approved by the Organic Materials Review Institute for use in organic food production. We applaud Karl and Shepherd’s Grain and urge them to move quickly to eliminate glyphosate from their farming practices.

Developing a more sustainable food system is a continually evolving journey. Just when you think you have reached your destination, new information sends you scrambling, demanding adjustments and out-ofthe- box thinking. This is how sustainability thrives; with insight, intelligence, courage … and a community that both understands and demands alternatives to commodity products. Knowing Fred, Karl, and the Shepherd’s Grain team, we might not know the challenges they will face on their journey, but we do know it will be honest and transparent, with a handshake and a heart. It’s the power of their flour.

Ellen Gray is the executive director of the Washington Sustainable Food & Farming Network and currently serves as a co-chair of the Good Food Coalition. She also serves on the Washington State Food Systems Roundtable, a public-private collaborative tasked with setting a 25-year vision and action plan for the state’s food system. 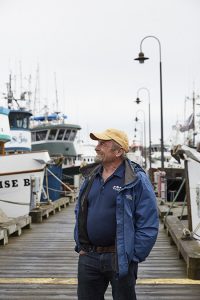 A Drop in the Ocean