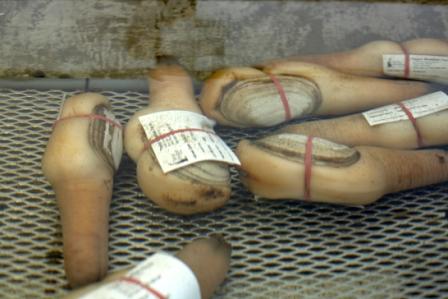 The geoduck is an intimidating clam. It’s huge and ugly and I’ve never been sure why anyone would want to eat it. But as a locavore, I was curious about this quintessentially local food, and set out to prepare it, eat it, and learn about its harvest.

With no idea what to do with geoduck, I turned to sushi chef Ryu Nakano, owner of Kisaku in the Tangletown neighborhood. When I asked if he could introduce me to geoduck, Nakano displayed the clam’s versatility and his own by cooking me up a six-course meal. The feast included geoduck chowder, butter yaki, Japanese-style curry, and of course sushi.

My favorites, a sashimi salad and an appetizer trio, emphasized the distinctive geoduck texture. Very thinly sliced sashimi resembles cucumber, while slightly thicker pieces provide a satisfyingly crunchy, chewy experience. It’s the oral version of breaking a piece of silly-putty between your fingers: first it gives, then it snaps.

Nakano sliced the sashimi snapping thickness, and presented it in a crisp salad with onion and sprouts on a bed of greens. The salad highlighted the clean, subtle sea flavor of geoduck without overpowering it in a dressing of sesame, vinegar, and just enough hot pepper to leave a mild tingle on my lips.

The appetizer plate comprised three tasty bites. On one end, a tangy, spicy geoduck shichimi-yaki, a lightly grilled slice of the clam marinated in soy and an aromatic blend of red chili pepper and other seasonings. On the other, tsukune, a fritter of sorts with flavors of sake, soy, and ginger. Nestled in between: Geoduck nuta, a beautiful mini salad of blanched geoduck, green onion, and wakame seaweed perfectly matched with the distinctive citrus taste of yuzu.

Once a cheap clam common in local chowder and fritters, geoduck is now primarily exported to parts of Asia, where it’s an exotic treat. In China, the long-lived clam is especially valued for its purported benefit to the eater’s longevity.

The clam’s popularity in China and Japan has translated into ready availability at Asian restaurants in Seattle. Here it’s easiest to find geoduck as hot pot or sushi. For Western fare, local diners are more likely to find it on the menu at upscale restaurants like Licorous or How to Cook a Wolf than at more affordable chowder houses.

The market for geoduck as an export has increased its local price considerably. The name geoduck derives from the Lushootseed “gwe-duc” or “dig deep”. Originally referring to excavating the clam from 3-plus feet of sand, now it might well describe reaching into one’s pocket to pay for the thing.

Taylor Shellfish, the largest producer of farmed geoduck, has recently lowered its price to $12 per pound (considerably less than $16-18 per pound elsewhere) in an effort to expand its connections to chefs and home cooks.

and other shellfish companies contend that farmed geoduck are a renewable resource that benefit the environment. The filter-feeders reduce harmful algae blooms and clear the water of particles, allowing light to penetrate deeper to the benefit of underwater vegetation.

But the companies face harsh criticism of their geoduck farming practices. Juvenile geoducks are planted in predator-excluding mesh-covered PVC tubes stomped into tidelands. Mature clams are harvested with high-volume hoses that create a slurry of the surrounding sand.

Apart from neighboring homeowners making aesthetic complaints about the farms, those concerned raise questions about the environmental impacts on other marine life. Geoduck aquaculture is less than 20 years old, and its effects are not well known. University of Washington departments are currently conducting research. They hope to learn whether placement of tubes alters the behavior of salmon and other species, how the ecosystem recovers after sediment is disturbed by harvest, and how geoduck aquaculture affects eelgrass meadow habitat.

Until the UW completes that research in 2013, the sustainability of farmed geoduck is likely to remain in dispute. Harvest of wild geoduck, though, is widely regarded as ecologically sound. Monterey Bay Aquarium’s Seafood Watch program lists wild-caught geoduck as a “best choice” among rated seafood. It does not rate farmed geoduck.

Wild geoduck is available for the digging to those with a license and a stout constitution. It takes an extremely low tide, a bottomless barrel to keep the deep water-filled hole from collapsing, and a willingness to get mucky from tip to toe.

For those who’d rather buy wild geoduck, it’ll take a bit of research and a bit of luck. Once harvested, it’s impossible to tell wild and farmed geoduck apart. And unlike other farmed seafood, such as salmon, there’s no difference in nutritional value or taste. The only way to know is to ask—though asking won’t always yield an accurate answer. At Uwajimaya, one employee told me there’s no such thing as farmed geoduck.

I knew my geoduck at Kisaku was wild because Nakano’s supplier offers clams from local tribal divers, who harvest only the wild clams. And I knew the geoduck I prepared for myself was farmed because it came from Taylor, which offers clams only from its own farms.

When it came to cooking the clam for myself, I felt inspired by my meal at Kisaku and empowered by a bit of research into how to clean the clam.

There are two parts of a geoduck used for meat: the siphon and the mantle. The exterior of the mantle and the siphon have a similarly chewy texture, in contrast with the soft interior meat, which some call the “breast” and others the “belly” (not to be confused with the “gut” or viscera, which is discarded).

When it came to preparing geoduck on my own, I found its interior meat the most appealing. I improvised a chowder with potatoes, leeks, and bacon . I improved on Kisaku’s chowder by using the interior part of the mantle only, rather than slices of the whole mantle.

I first prepared my chowder sans geoduck, dropping clam pieces in after removing the soup from the heat. It had cooked by the time I ladled it into my bowl moments later, resulting in silky and tender clam pieces similar in texture to the chanterelles I also included.

It’s a pricey clam for chowder, but made with seasonal produce on a chilly evening, I relished my soup as a palate- and soul-satisfying comfort food that seemed worth the price.

Jenni Pertuset writes about reading, parenting, and farming at pertuset.net/openbook. She’s scheming to join the burgeoning agrarian revival in her own urban neighborhood. Jenni lives with her husband Steve and daughter Meg on Seattle’s Queen Anne hill. 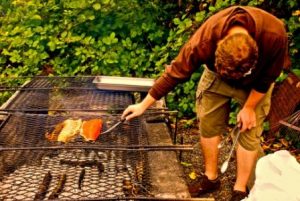 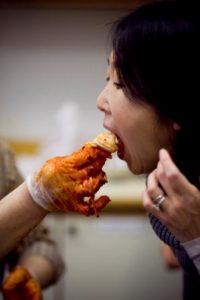